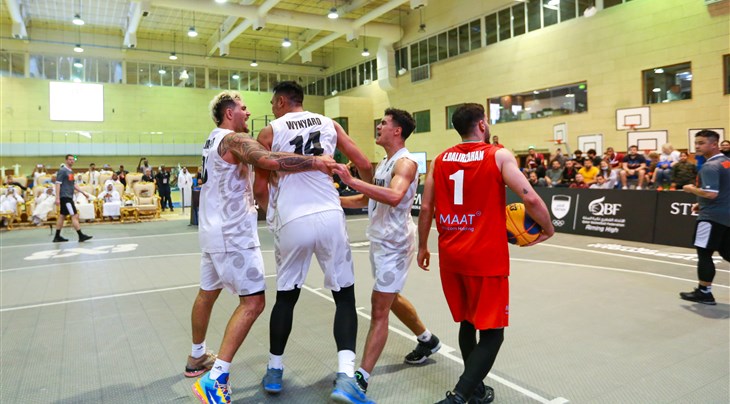 DOHA (Qatar) - With the final ticket to the FIBA 3x3 World Cup 2022 up for grabs, as New Zealand and Iran slugged it out in a thriller with scores deadlocked at 20 apiece, Tai Wynyard decided it was time to take matters into his own hands.

Such the stakes, both teams were struggling with the pressure in the final of the FIBA 3x3 World Cup Qualifier Asia 2022 as the score remained unmoved for almost a minute. But the 6ft. 10in (2.08m) Kiwi giant knew it was time to use his enormous physical gifts to put the round thing in the round thing.

"I was thinking I need to get a bucket," Wynyard said. "If anyone was in my way then I'm still putting the ball in the hoop."

With 52 seconds left, Wynyard received the ball at the elbow then moved back outside the arc before quickly driving down the middle and bulldozing through Behshad Arabzadeh - who stands five inches shorter and almost 30 kgs lighter - to score the winning bucket.

Living up to his team's famous nickname, the Tall Black let out a roar like he was Arnold Schwarzenegger about to fight the predator as New Zealand celebrated a famous victory and the last men's ticket to Antwerp - joining their female counterparts who also emerged victorious in Doha.

"There wasn't anything between us but it came down to who wanted it more and we just showed so much fight," Wynyard said.

It capped a gruelling and emotional journey for New Zealand, who through travel mishaps needed 48 hours to travel to Doha and the triumph meant something extra special after losing someone close to them.

"We fought together through adversity like a team of lions," he said. "No one complained once and we got the job done in the name of (New Zealand basketball icon) Kenny McFadden who sadly passed away a few days ago."

The favorites and Oceania's No.1 ranked team were on the brink of elimination when they trailed 20-18 before Wynyard decided the team needed an overhaul on defense.

"We came in with a game plan to switch everything up but they were shredding me when I was at the top of the arc," he said. "So I said let's just play man to man defense and I'm proud of how we adjusted and turned it around."

Despite having so many chances to win, Iran were held scoreless in the last 70 seconds against New Zealand who also had to tough it out with Taylor Britt struggling with gastro.

It marked a successful return to 3x3 for 24-year-old Wynyard, who led New Zealand to glory at the FIBA 3x3 U18 World Cup 2015 with an MVP performance and he starred in the same tournament a year later.

He hadn't been seen since in 3x3 as Wynyard embarked on a college career in the USA with famous Kentucky but serious back injuries derailed his prospects.

Clearly fit and firing, the big fella showed he had not lost his brute strength and athleticism. "The back is great and the best it has felt in a long time," Wynyard said. "I'm loving being out on the court and re-launching my career."

After such a long time out of 3x3 - it didn't even have Olympics status the last time he played - Wynyard said the 21-point game had gone up a level. "It's definitely faster and there is more talent now," he said. "It is such a great game to watch and play, so I'm glad to be back playing."

Having secured their ticket to 3x3's showpiece event in 2022, New Zealand are hoping to make some noise in Antwerp. "This is so huge for 3x3 in New Zealand and we know the team will play well at the World Cup," Wynyard said.

"New Zealand always punches above its weight no matter what the sport and that will be the case again in Belgium."