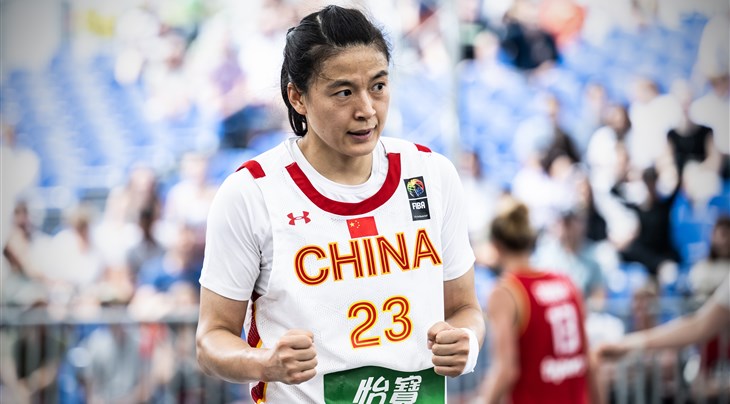 SINGAPORE - After winning bronze at the showpiece Crelan FIBA 3x3 World Cup 2022, there is no respite for China (women) who are eyeing their first continental title in Singapore on July 6-10.

Having clinched another medal on the big stage in Antwerp, a confident China loom as the favorite in the 12-team women's draw at the FIBA 3x3 Asia Cup 2022.

They boast two Olympians: star duo Lili Wang, an absolute bucket getter who was named in the team of the tournament, and towering Zhiting Zhang, who completely destroyed opponents in the paint. The one-two punch highlight No.4 seed China, who have an early Pool C blockbuster against reigning champs Australia.

All eyes will be on the contest between two of the best in Asia but there is an unknown over Australia, who were a dominant team before the Covid-19 pandemic but haven't had many opportunities to play since.

They will be without 3x3 stars Maddie Garrick and Bec Cole but a familiar face is Marena Whittle who has represented the green and gold before.

The other team in Pool C will come out of qualifying.

Top seed Mongolia highlight Pool A and are looking for the country's first crown in the women's draw. With a deep pool of talent through growing professionalism in Mongolia, a country where 3x3 is the most popular team sport discipline, there is a lot of expectations on this fan favorite.

Mongolia, who famously became their country's first ever team in any sport to qualify for the Olympics at last year's Tokyo Games, showed glimpses of top form at the World Cup with a big victory over Egypt before losing to eventual champs France in the play-in to the quarter-finals.

Young star Khulan Onolbaatar had some shooting struggles but if she can heat up Singapore then Mongolia might just live up to top billing as they face two qualifiers first up. Asian power Japan top Pool B as the No.3 seed and boast Moe Nagata and Tamami Nakada, who were part of the team's World Cup campaign where they failed to get out of the pool stage but did upset rival China.

Japan will have to battle an expected loud crowd who will be cheering their hometown heroes Singapore on, while the third team in the group comes out of qualifying.

In Pool D, 5th seed Chinese Taipei is favored although should be wary of 14th seed Sri Lanka with the final team coming from qualifying.

In the men's, like their counterparts, Mongolia are the No.1 seed and top Pool A. It's easy to see why they are favorites with their teams having gone up a level on the pro circuit and the country's best performed solidly at the World Cup only to fall short in the play-in to Poland.

They have the same awesome foursome from Antwerp led by rising superstar Anand Ariunbold who continued his sizzling shooting this season with 24 points from just 4 games.

If he continues his hot streak then Mongolia will be tough to beat and they should be too good in Pool A, which contains two qualifiers.

Mongolia's biggest threat in the competition might be defending champs Australia, who top Pool B.

Man mountain Greg Hire played in that memorable triumph in 2019 and 3x3's Thor has not lost his strength having led underdog Melbourne to a surprise semi-final finish at the FIBA 3x3 World Tour Manila Masters, where they shocked Ulaanbaatar MMC Energy in the quarter-finals.

Melbourne players Jesse Wagstaff and sharpshooter Andrew Steel will line up for a dangerous looking Australia who face two qualifiers first up.

Pool C is led by host Singapore with the remainder of the group - along with the entirety of Pool D - to be filled by qualifiers. The qualification into the main draw will be determined on July 6-7.

The Asia Cup returns after three years and the fifth edition will be played in Singapore, where 3x3 was showcased to the world at the Youth Olympic Games in 2010.

It's going to be a memorable five days in Singapore, where 3x3's best in the region will be bringing the heat.