What we learned from Crelan FIBA 3x3 World Cup 2022 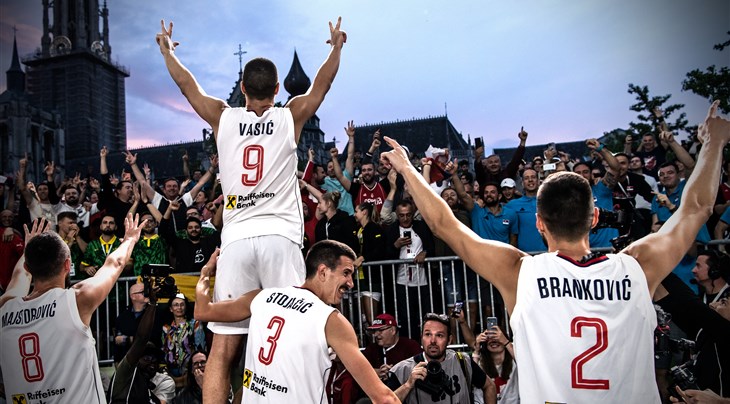 ANTWERP (Belgium) - After three long years, 3x3's biggest event was worth the wait after a spectacular Crelan FIBA 3x3 World Cup 2022 on June 21-26.

The non-stop entertainment rocked the Groenplaats in Antwerp and attracted sellout crowds to produce a lit atmosphere that only 3x3 can create.

Before we resume the pro circuit, let's reflect on this epic event and what we learned from the seventh edition of the FIBA 3x3 World Cup.

A decade after capturing the first ever 3x3 World Cup in Athens, Serbia's latest W might have been their best considering this was a new-look team. There was no Dusan Bulut or Marko Savic, legendary 3x3 players who had been part of four World Cup triumphs previously.

But it was far from easy for the No.1 seeds who were tested early by New Zealand and Puerto Rico before finding their best when it mattered most in the knockout stage.

Even a rowdy home crowd in the semi-finals willing their Belgian heroes on couldn't ruffle these Serbians, who should start their own Marvel franchise because these dudes are always box office.

They finished unbeaten to cement Serbia's legacy as the absolute standard in men's 3x3.

The 'Maestro' is an undisputed winner

Dejan Majstorovic is a born winner. After winning his fourth title, the Serb joined his former Novi Sad teammates Bulut and Savic as the most decorated World Cup players in 3x3 history.

And 'The Maestro' is getting better. He's ageing better than Tom Cruise after winning MVP - five years after claiming that top honor at FIBA 3x3 World Cup 2017 right in the midst of his prime.

But the 34-year-old has been rejuvenated ever since he crossed over from Novi Sad to Ub, who have been the best team on the FIBA 3x3 World Tour this season.

The sweet shooter remains the dude you want the Wilson with when the game is on the line but he's also become arguably the best leader in 3x3. And he's now proven he can win without his old sidekicks as Majstorovic takes his place in the record books.

But he's not nearly done. Dejan Majstorovic is aiming to re-write all the records and hold the most trophies in 3x3 history. Don't ever doubt this champion. Laetitia Guapo for some time was the best women's player in 3x3 but she had a down 2021 underlined by a disappointing Tokyo Olympics, where favored France missed out on a medal.

The 26-year-old was out to prove a point in Antwerp and she did exactly that as Guapo superbly led a new-look France to their first women's World Cup gold medal.

Many had fallen off the French bandwagon believing they had been overtaken but Les Bleues had a magical run led by their superstar, who hit all the big shots, created off the dribble and often had to defend the biggest players in a small-ball French roster.

Guapo was key with 9 huge points in the semi-finals to outlast China and then had an equal team high of 5 points in the final against Canada.

The 6ft (1.82m) star never stopped believing even when some had written her off as she powered France to their greatest moment in 3x3 and claimed the MVP along the way.

Lithuania are a 3x3 powerhouse now

Lithuania have long been a basketball powerhouse but it hasn't quite translated into 3x3, where success has been scattered. Their status has now changed and been elevated after winning silver (men's) and finishing fourth (women's) in Antwerp.

The men's No.2 seed were perhaps underrated by many but we all should have taken them more seriously. Lithuania served notice after comfortably beating USA 21-11 in the quarters then squeezed past France in a semi-final classic before falling short to Serbia in the final.

Darius Tarvydas was the leading scorer in the tournament and colder than Lithuanian winter after making it rain in Antwerp. But he had plenty of support and formed a devastating one-two punch with Ignas Vaitkus.

The women were almost as lethal with the 9th seed enjoying a stellar run to just miss the podium after losing to China in the bronze medal game.

At the heart of their success was Kamile Nacickaite, who was lights out and finished the top scorer in the women's draw with a crazy 45 points.

Overshadowed by several Eastern European powers, Lithuania have arrived in 3x3 and they ain't going anywhere.

And the love was spread between the teams with men's star Marijus Uzupis proposing to his girlfriend and women's player Martyna Petrenaite after claiming his silver medal in one of the most emotional moments in 3x3 history.

The bigger stage, the better China play. The 18th seed had a stellar title defence to finish with bronze to replicate their medal they won at last year's Tokyo Olympics.

Only a heartbreaking 17-16 semi-final loss to France ended their dreams of a title repeat but they can be pleased of their efforts.

They were led by ZhiTang Zhang, who bullied opponents down low, and dynamo Lili Wang, who featured in the Team of the Tournament.

China, once again, proved their seeding can be disregarded in big events because they always rise to the occasion.

USA can't quite conquer this version of hoops

Team USA always have enormous expectations at hoops events. 3x3 has been harder for them to dominate over the years although the men's entered as reigning champs while the women's had claimed Olympic gold last year.

But both teams had a makeover and it proved unsuccessful with USA walking away empty-handed after both teams fell at the quarter-finals. The men's could never quite get going and lacked chemistry as they attempted to weave in newcomers Khalil Iverson and James Parrott.

USA were almost shocked by underdog New Zealand in the Last 16 before an incredible late comeback prolonged their tournament but only for one more game as their title defence came to a screeching halt against Lithuania.

The women's did have an unbeaten pool stage - including a win against eventual winners France! - but USA fell to rival Canada in the quarters to extend their World Cup winning drought to eight years.

USA's campaign ended in tears but we just hope Hailey van Lith is back in 3x3 because she once again dazzled through her deep bag of tricks.

Tai Wynyard is a force of nature

Underdog New Zealand made an impact and were oh so close to the upset of a lifetime against USA. It wasn't to be but Tai Wynyard showed on the world stage that he's back fit and firing as he re-launches an injury plagued career.

The 24-year-old proved he is stronger than Thor in a dunking exhibition and he also had his own personal block party as The Typhoon stormed through Antwerp.

Keen to keep playing 3x3, a game that perfectly suits this 6ft. 10in (2.08m) giant, Tai Wynyard is must watch every time he steps on the half court.

The atmosphere was lit

As the world slowly returns to normal, it's been incredible to rediscover the 3x3 experience. Boy, is it insane!

The fans were rocking the stands in Antwerp like they were watching Kendrick Lamar at Glastonbury in a reminder that 3x3 is the ultimate festival.

With the world watching, the port city of Antwerp quickly cemented itself as an iconic 3x3 venue as everybody welcomed back 3x3's premier event with open arms.

It did not disappoint.