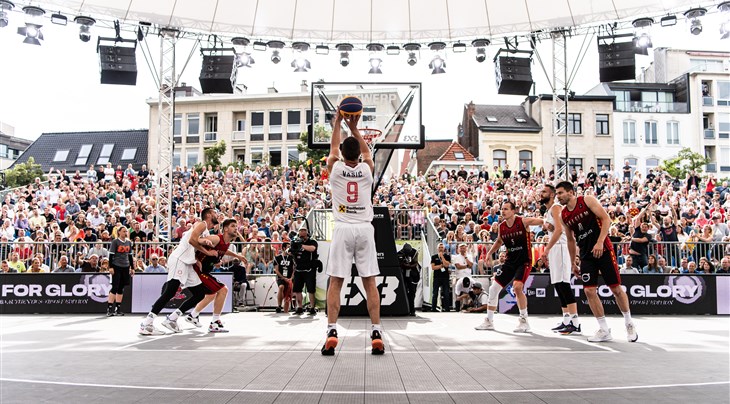 MIES (Switzerland) - We still haven't caught our breath after an incredibly lit Crelan FIBA 3x3 World Cup 2022, which was the biggest 3x3 event of the year.

But the good news is the season is just getting started and we have plenty of massive 3x3 events to get you hyped.

We had an appetizer before the World Cup with two Masters in May to start the biggest and baddest pro circuit season with a bang.

In case you've forgotten, world No.1 Ub lived up to top billing after winning the Utsunomiya Opener and Manila Masters.

And the spectacular Serbs will be on a high after three of their stars - MVP Dejan Majstorovic, Marko Brankovic and world No.1 Strahinja Stojacic - played key roles in their country's fifth World Cup triumph in Antwerp.

They've raised the bar in 3x3 and it's time for the competition to catch up starting at the Prague Masters on July 30-31. It's the first of another 10 Masters in a packed schedule before the showpiece Abu Dhabi Final in December.

It's the biggest ever World Tour, which will travel to a bunch of new locations including Utrecht, Cebu, Macau and Hong Kong.

There are also a bunch of all-important Challengers starting with Poitiers on July 1-2.

There was a teaser of the women's pro circuit at Tel Aviv in May, but you've seen nothing yet!

It resumes with the Poitiers Stop before quickly hopping to favorite 3x3 destination Ulaanbaatar on July 1-2. There are a further eight stops before the grand finale in Constanta in September.

This season there has been an extra flavor added with the inclusion of private teams, rather than just federations, adding to the depth and talent of women's 3x3.

After seeing wonder women in action in Antwerp, be sure not to miss your favorite players in the Women's Series.

After a three-year absence, the FIBA 3x3 Asia Cup returns on July 6-10 in Singapore - the famous South East Asian country where 3x3 made its worldwide debut at the Youth Olympic Games in 2010.

Continental supremacy will be on the line when 12 women's and 12 men's teams do battle in the main draw in a fight to be crowned best in Asia. Australia are the defending champions in both genders but the talent pool in the continent is much deeper these days.

The FIBA 3x3 Europe Cup will this year be played in Graz, Austria, which has emerged as a fan favorite 3x3 destination. A total of 24 teams from 20 different countries will compete at the event on September 9-11.

The fourth edition of the FIBA 3x3 Africa Cup will be held in Cairo in December to end a three-year drought of the tournament. Host Egypt are the defending men's and women's champs.

Check out these insane plays if you've forgotten how incredible the standard of competition is across Africa.

And keep an eye out for more details on the the second edition of the FIBA 3x3 AmeriCup, which had an amazing debut last year in Miami where host USA blew the competition away in both genders.

The Next Gen of 3x3 stars will be showcasing their skills, so circle those dates.

That is hopefully enough to keep you thirsty 3x3 fans satisfied for the remainder of 2022!