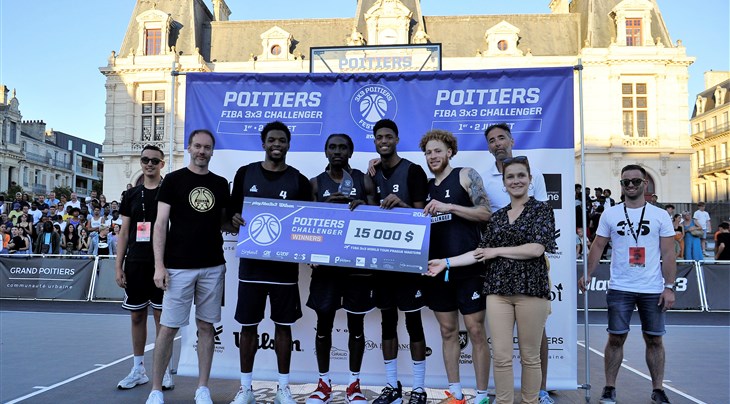 They ranked: 1st in rebounds, drives, blocks and dunks

Who would have thought these dudes could win it after struggling to make it out of the pool stage? Washington DC were limited to just 12 points, shooting 1 for 12 from behind the arc in their opener and only advanced to the quarter-finals on a three-way tie after beating Marijampole Mantinga (already). Led by Hassani Gravett (who played a few games with the Orlando Magic in the NBA last season), the US team got better with every game.

Gravett scored an amazing step-back game-winner to knock out 3rd seed Amsterdam (NED) in the quarters. The team shot 15-27 from the field to (convincingly) beat Danube (21-13) in the semi-finals and Khalil Iverson (who repped USA at the Crelan FIBA 3x3 World Cup 2022 last week) stepped up in the final with a game-high 7 points and 10 rebounds and the game-winning 2 in OT. Keaton Wallace led the team in scoring in Poitiers and was named MVP of the Challenger.

They ranked: 1st in key assists, two-pointers made and two-point percentage

Lithuanian players continue to shine in 3x3 just a week after a silver medal at the Crelan FIBA 3x3 World Cup 2022. None of the national team players were on the team. But somehow, they managed to avenge the World Cup final loss with an upset of the number one team in the world Ub Huishan NE (SRB), which includes 3 of the world champions, including World Cup MVP Dejan Majstorovic.

The team played beautiful team 3x3 as evidenced by the team's first place in key assists. Two of their players ranked 1st and (joint) 2nd: Tautvydas Kliučinykas and Aurimas Urbonas. Also the Lithuanians were lights out from outside the arc. They led the Challenger in 2-pointers made and 2-point percentage (which doesn't happen so often). Žygimantas Šimonis deserves a shout-out here: he made 50% of his bombs from long range (13/26!).

The final was absolutely epic, the only game in the entire tournament that went to overtime. Washington DC started well and built their biggest lead of the game (7-3, +4) after 3 minutes following two shots from beyond the arc from Iverson and Wallace. But Marijampole Mantinga tied the game at 7 and made it close for the rest of the game. Gravett thought the game was over when he finished a tough drive to the basket and gave his team a two-point cushion but Aurimas Urbonas hit a deeeeep buzzer-beater off the glass to send the game to overtime.

In overtime, both teams had their chance to win it. The Lithuanians even briefly took their second lead of the entire game (after being up 3-2 in the first minutes). But they finally started to miss some shots from behind the arc and Washington DC was just eating every rebound (9 vs. 0 offensive rebounds). Khalil Iverson had the answer and buried a big two-pointer for the win.

The reward: Two tickets to the Prague Masters

Washington DC and Marijampole Mantinga qualified for the Prague Masters on July 30-31, 2022.

Key Stats:
- Washington DC won the event despite being the 14th and lowest seed in Poitiers (since most of the players were competing in their first event)
- The final was the longest game of the tournament. In fact, it was the ONLY game that went to overtime!
- Three different players had a triple-five over the weekend: Natan Jurkovitz (Fribourg, SUI), Bogdan Dragovic (Danube, SRB) and Khalil Iverson (Washington DC, USA), who had 10 points, 5 rebounds and 5 highlights in the semi-final against Danube. He also did that on day 1:

- Strahinja Stojacic had a rare double-double in the semi-finals (11 points and 10 highlights).