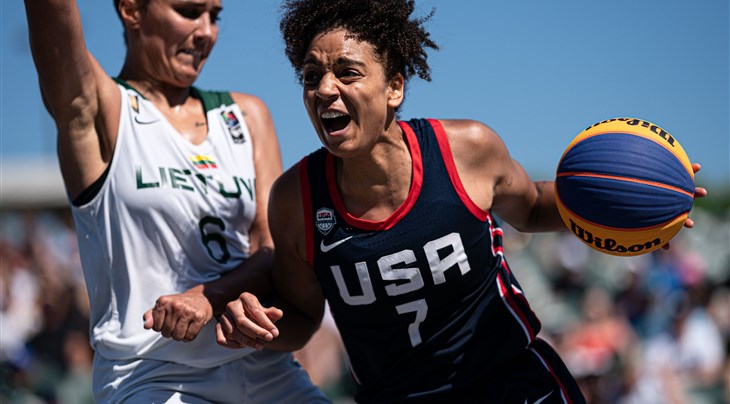 MONTREAL (Canada) - Confident USA and Lithuania will again clash in a Day 1 blockbuster as the FIBA 3x3 Women's Series 2022 heats up with the last Stop before the Final in Montreal on September 2-3.

USA won their first title of the season when they defeated Lithuania in the final in Quebec and the teams will renew their rivalry in Pool D. There is much at stake for the 12 teams in the draw with spots up for grabs at the looming Constanta Final on September 17-18.

Hoops power USA have hit their straps at the right time and are looking to go back-to-back before the showpiece finale. They will be without Quebec MVP Lauren Cox and 3x3 OG Cierra Burdick but there is no need to worry about the red, white and blue.

Lethal lefty Linnae Harper has been sizzling from deep all season with an insane 49% and if she's dropping two-pieces then it could be over.

USA will face an early test against No.4 Lithuania who will also be missing a few key players but 24-year-old Martyna Petrenaite might just be the next big thing and she'll enjoy the extra responsibility.

We could have easily started this section with No.1 seed Canada who are back on their home turf. They just might enter with more swag than Drake as Canada have been strengthened by the pairing of the Plouffe sisters with Katherine returning.

No.2 Spain are always contenders and stand out in Pool B having enjoyed another solid season. The same Spanish armada that won in Montreal last year is back and ready to add a second title this season after Bordeaux.

No.3 seed France have already achieved the ultimate in 2022 after taking out the Crelan FIBA 3x3 World Cup 2022. But they have gone off the boil and their results are going backwards capped by a quarter-final exit on home soil in Eaubonne.

They've got a youthful squad but it's stocked with talent led by 25-year-old Maud Stervinou, who can create flames from deep.

There is just 1 last ticket up for grab and 5 teams can book their ticket to Romania:

The Race to the Final

China are currently in 8th place and if the regular season ended today, they would go to Constanta. But since they are not competing in Montreal, the other 4 contenders would have to have an early exit for China to keep their Top 8 spot.

Dusseldorf ZOOS (GER) made a major statement in Eaubonne with a runner-up finish as they inch closer to a first title in their debut season. They are in the driver's seat as the next best ranked team (after China) to compete in Montreal. This means that if they rank higher in Montreal than the next 3 teams we're about to mention, Ama Degbeon, Aoi Katsura and the rest of the squad are guaranteed to make it to the Final.

France's depth in 3x3 is remarkable and their U24 team now rises into this category after they stunningly took out the title in Eaubonne. Three members return, including Emma Peytour who was the MVP as she makes the leap.

No.9 seed Hungary always make deep runs having notched three semi finals this season and if Klaudia Papp gets going maybe they can go one step further.

It's been a frustrating season for the Netherlands, who have stumbled three times in the quarters. But the Loyce Bettonvil-led team are more than capable of going on a giant killing run starting with the formidable challenge of playing Canada in Pool A.

They can no longer make it to the Final but they'll certainly be motivated by the title, prize money and ranking points: Japanese team EXEWING, Latvia and new kids on the block Toronto from Canada are also well worth keeping an eye on.