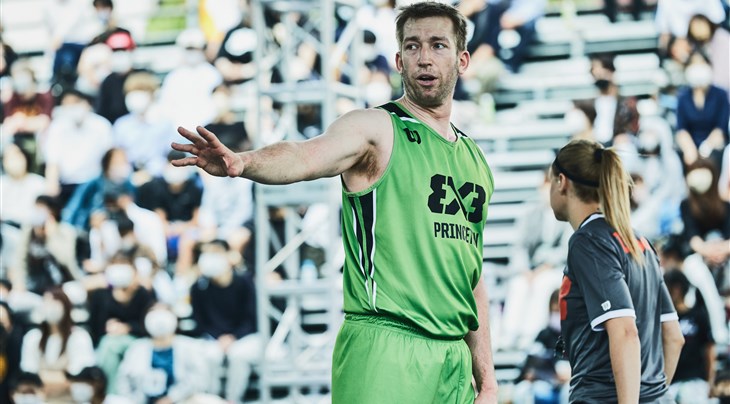 HAMBURG (Germany) - No.2 seed Princeton (USA) will be motivated to go one better at the FIBA 3x3 Hamburg Challenger on July 8-9.

In a loaded field of 16, teams will be desperate to chalk up a title as the pro circuit goes into overdrive with a busy schedule ahead. There are two prized tickets available for the Prague Masters, which is the third and next stop on this year's FIBA 3x3 World Tour.

But they have a point to prove after losing 21-8 in the final to Antwerp and hope to rebound strongly in Hamburg, where they headline Pool B.

Princeton bring the same squad to Hamburg led by Canyon Barry - the FIBA 3x3 World Cup 2019 and FIBA 3x3 AmeriCup 2021 champ and son of NBA legend Rick Barry - who was lights out in Bordeaux to top the scoring charts.

He should have plenty of support namely from Robbie Hummel - the World Cup 2019 MVP - whose radar was off in France but if he can find the target this time around then Princeton will be hard to beat.

They might need to overcome a major hurdle at some stage in the form of No.1 seed Liman Huishan NE (SRB) complete with familiar stars who have dominated the pro circuit for years.

The Serbs are well rested since taking out the Novi Sad Challenger 2022 in early June but will be missing big fella Mihailo Vasic , who was part of Serbia's spectacular World Cup triumph. But nothing will upset them as we well know Liman fight like Djokovic at Wimbledon's centre court, so expect another trademark strong showing. Also, they will bring in their prized recruit, Miroslav Pasajlic, who shined for Ub (SRB) in previous seasons.

There are plenty of challengers to the top two seeds starting with No.3 Jeddah (KSA), whose much hyped new-look team are hoping to start collecting Ws.

They've started slowly after the editions of Slovenian 3x3 legend Simon Finzgar and lethal Lithuanian Darius Tarvydas - who was memorably part of his country's silver medal at Crelan FIBA 3x3 World Cup 2022 - but if they showcase chemistry in Hamburg then look out! No.4 seed Lausanne (SUI) are always must watch and can beat anyone on their day. When Gilles Martin and Wes Molteni team up you just know it's going to end up on social media.

But this deep field also has serious dark horses with No.5 seed Chicago (USA) underlining Princeton's commitment to providing a deep pool of talent on the pro circuit in 2022 and beyond.

You want another? Dusseldorf LFDY (GER) have been highly competitive as they aim to make the leap and this might just be their breakout in front of loud German fans.