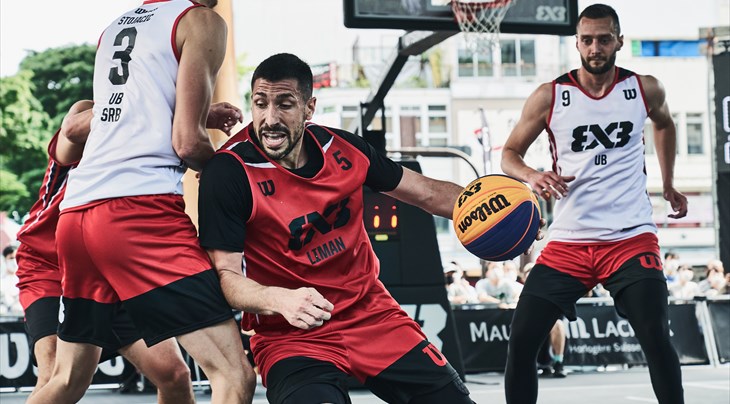 PRAGUE (Czech Republic ) - Red-hot Liman Huishan NE (SRB) will be aiming to continue their momentum at the Prague Masters as the FIBA 3x3 World Tour 2022 resumes in style on July 30-31.

After an incredible opening two Masters, the World Tour went on pause as the FIBA 3x3 World Cup 2022 and Asia Cup took centre stage. There have also been a bunch of Challengers with Liman in dominant form having claimed three titles in a row during a 15-game winning streak.

Out to capture their first Masters of the season, the No.2 seed headline a tough Pool B, which features Warsaw Lotto (POL) and Belgrade Partizan (SRB), who Liman beat in a 21-19 thriller in the final of the ING Hamburg Challenger.

Liman should also feel confident against the emerging Poles after a convincing 20-13 Day 1 victory en route to a runner-up finish at the Manila Masters.

Sniper Stefan Kojic is expected to return for a full-strength Liman having missed the Lipik Challenger, while Warsaw will need bucket-getter Przemyslaw Zamojski to be at his best if they can cause a Day 1 upset.

For all Liman's recent success, No.1 seed Ub Huishan NE (SRB) deserve the favoritism having claimed back-to-back titles at the Utsunomiya Opener and in Manila.

Ub want to be the best team since legendary Novi Sad, Majstorovic's former side, and they are backing up their brash words on court.

It would be a shock if Ub don't make it out of Pool A, which features a qualifier and Ostrava Victoria (CZE) who boast young gun Martin Svoboda fresh off an MVP run at the FIBA 3x3 Nations League U21 Europe East Conference.

3x3 power Riga (LAT) top Pool C but they've found things more difficult without Karlis Lasmanis. While they wait for 'Flight KLM' to land, No.3 seed Riga still have to be taken seriously with three Olympic gold medalists in their line-up led by Nauris Miezis who is certainly capable of leading a Marvel franchise.

Edgars Krumins is in fine shooting form to fuel belief for Riga as they face rising Marijampole Mantinga (LTU) and Hamburg (GER) on Day 1. Both loom as dark horses with Marijampole finishing runner-up at the Poitiers Challenger, while host Hamburg made the semis at the ING Hamburg Challenger.

Pool D just has to be the 'Group of Death' because it's hard to predict who will emerge out of Day 1. Sakiai Gulbele (LTU) have shown glimpses of brilliance this season highlighted by a win at the Ulaanbaatar Challenger (the first of the season) and an upset over Antwerp (BEL) en route to a semi-final finish at the Ultra Novi Sad Challenger.

But they will need their big guns firing, especially World Cup bronze medalist Marijus Uzupis to pull out his famous uzis, if they are to overcome Ulaanbaatar MMC Energy (MGL) and new kids on the block Washington DC (USA), who issued a statement with victory at the Poitiers Challenger on their 3x3 pro circuit debut.

One dude to look out for is the explosive Hassani Gravett, who played a few games with the Orlando Magic in the NBA last season and lit up Poitiers with his XXL bag of tricks.

But the newcomers will be faced with a severe test against their more experienced opponents, including Ulaanbaatar who arrive with a swagger after reaching the semis of the Lipik Challenger (and earning their tickets to the Lausanne Masters).

It all adds to what will be another unpredictable Masters as the wait is over for the much-anticipated return of the World Tour.