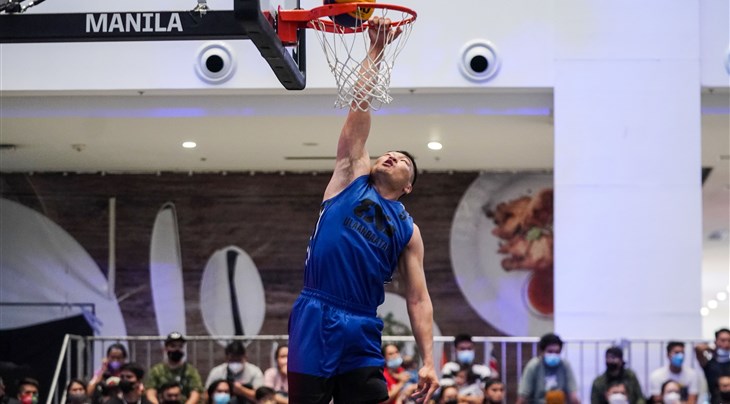 MANILA (Philippines) - The FIBA 3x3 World Tour returned to the Philippines for the first time in seven years and made up for lost time with Ulaanbaatar MMC Energy (MGL) making a statement in the Manila Masters with an unbeaten Day 1.

New-look Ulaanbaatar MMC Energy came into their first Masters of the season in good form after reaching the final of the Ulaanbaatar Super Quest and Challenger.

They silenced the home crowd first up with a barrage of hot shooting before the masters provided a lesson to their Mongolian apprentices. But a well-drilled Ulaanbaatar won't be satisfied as they eye the big prize.

Prized Ulaanbaatar recruit Steve Sir proved he still had the shooter's touch -made more impressive after he had struggled with a stomach bug over the past couple of days - and he hit 7 twos and scored 16 points overall on Day 2.

Barking instructions on the sideline, the player-coach has lost none of his passion as he inspires the Mongolians to greater heights.

The Mongolians wanted to make an impact in Manila and Sansar MMC Energy (MGL) did exactly that with the big 21-13 upset of No.2 seed Antwerp (BEL).

Anaad Arianbold made Manila have a heat wave with incredible shooting, including a trio of twos. Impressively, Sansar shut down the normally free flowing Belgians, who went ice cold especially Thibaut Vervoort aka 'Must See TV' who had the plug pulled out and hit just 1-of-10 from 2.

THE MOVE AND THE SHOT

The Manila Masters started in crazy fashion with the Philippines No.1 player Mark Tallo living up to top billing with maybe the sickest play seen on the World Tour so far this season.

Crossing up like he was in church, Tallo broke the ankles of Ub's Strahinja Stojacic, who usually embarrasses opponents but the No.1 player was this time clowned as the Alaya Mall's roof nearly fell off.

Tallo was a one-man show with 11 points and 5 two-pointers but Cebu Chooks (PHI) fell short 21-17 in a thriller to No.1 Ub (SRB) in an amazing start that had the Filipino fans literally jumping out of their seats.

But Tallo wasn't done just yet and he stood tall when it mattered most with Cebu's Day 2 hopes in the balance against Zavkhan MMC Energy (MGL) with the scores tied at 19.

He had scored just 1 point to that stage but Cebu still trusted him to take the biggest shot of the game. Tallo didn't let them down with a monster Maurice Lacroix buzzer beater to get the crowd starting the Saturday night party early.

In good news for everybody, Mark Tallo will be ballin' out on Day 2.

Melbourne (AUS) had to do it the hard way from qualifying but after four bruising games, these tough Aussies defied the odds - and fatigue - to make it through to Day 2.

After losing to Antwerp, Melbourne had their backs to the wall against in-form Sansar in a see-saw of a contest.

But 3x3 newcomer Jesse Wagstaff was clutch with 11 points and Greg Hire, a former Australia 3x3 national player, willed Melbourne over the line to clinch a spot on Day 2 and also stunningly knock out Antwerp, who will have to wait a little longer to end their Masters drought.

Jesse Wagstaff and Greg Hire have teamed up at the 2022 Manila Masters @FIBA3x3 World Tour event! 👀

Manila Chooks were down big in the final game of Day 1 against Zaisan MMC Energy with a spot in the quarter-final up for grabs for both teams.

But willed on by their incredible fans, the hosts came back with a fury to overrun the Mongolians after Chico Lanete calmly drowned two free throws to spark memorable celebrations as two Filipino teams booked their places to the quarter-finals.

Ulaanbaatar MMC Energy reached 22 points in both pool games
Dejan Majstorovic (Ub Huishan NE) was #1 in P-val after pool play (22.0)
Mark Tallo (Cebu Chooks) was the player to watch with 9 highlights
Ulaanbaatar MMC Energy vs Manila Chooks was the Maurice Lacroix fastest game of the day with a playing time of only 5:53.

Watch Day 2 of the World Tour Manila Masters on our YouTube channel.