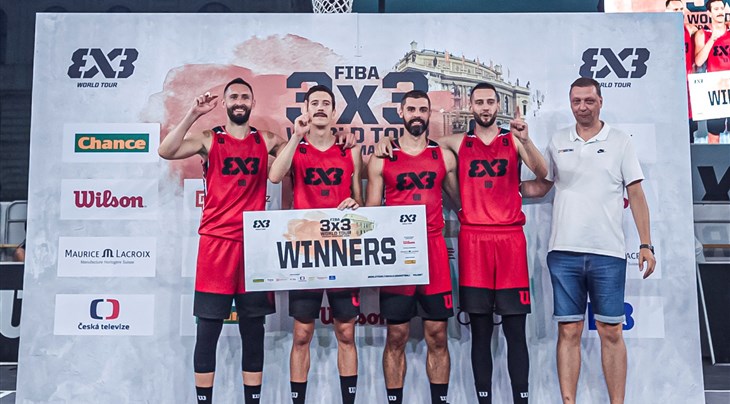 The number one 3x3 player in the world Strahinja Stojacic went off in the title game. The event MVP scored his team's last 8 points, including a cold-blooded two-pointer from the left wing for the win. The man known as 'Doctor Strange' was feeling it from behind the arc. He went 6-7 from long range and scored a game-high 14 points. He actually led all scorers in Prague with 36 points overall (tied with Belgrade's Ivan Popovic) and ranked number one in player value.

Ub Huishan NE (SRB) became the first team in four years to win three World Tour events in a row (Utsunomiya Opener, Manila Masters and Prague Masters)... since current Ub's captain Dejan Majstorovic's former team - Novi Sad (SRB) did it in 2018. The team is now on a 14-game winning streak on the World Tour (they only lost their opening game) and is looking to replace Novi Sad in the history books. "Our goal for this season", Stojacic said in the final post-game interview, "is to beat Novi Sad's old record of 32 wins in a row."

Newcomers shined in Prague. Belgrade Partizan (SRB) and Washington DC (USA) finished second and third respectively on their first World Tour appearance. With a new-look roster, Tel-Aviv (ISR) became the first Israeli team to reach the semi-finals of a Masters.

The FIBA 3x3 World Tour will be back on August 19-20 for the 9th edition of the Lausanne Masters.

Wilson is the Global Ball Partner. Wilson is also the Apparel Partner, Maurice Lacroix the Official Timekeeper and Chooks-to-Go the Global Partner of the FIBA 3x3 World Tour 2022.