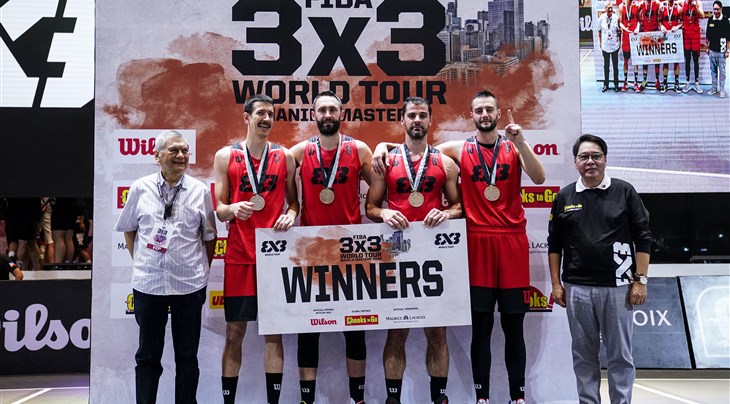 MANILA (Philippines) - Just two weeks after winning the Utsunomiya Opener, Ub Huishan NE (SRB) continued their domination of the FIBA 3x3 World Tour at the Manila Masters, which took place at the Ayala Malls on May 28-29, 2022.

The number one 3x3 team in the world went undefeated in the Filipino capital (they've now won nine games in a row on the Tour) and defeated their countrymen Liman Huishan NE (SRB) in the final, 20-17.

Ub captain Dejan Majstorovic was named MVP after leading his team in points and player value at the event. The man known as 'The Maestro' shined in the final with 8 points though it was his teammate - lefty Marko Brankovic - who led all scorers with 9 in the game.

Both teams were meeting already for the sixth time on the pro circuit (Ub are up 4-2 and won the last three games) and had little secret for one another: Majstorovic and Liman stars Aleksandar Ratkov and Mihailo Vasic won a bronze medal together for Serbia at the Tokyo 2020 Olympics.

Majstorovic is now 3 for 3 in events played in the Philippines after winning the FIBA 3x3 World Cup 2018 and the FIBA 3x3 World Tour Manila Masters 2015, which was the last time the Tour had stopped in Manila before this successful return seven years later.

The most represented country at the Manila Masters was Mongolia. The Eastern Asian country of 3 million inhabitants had qualified a total of four teams at the event, including World Tour rookies Sansar MMC Energy, who stunned the number two seed Antwerp (BEL) in the pools and finished third overall.


The FIBA 3x3 World Tour will be back on July 30-31 for the 9th edition of the Prague Masters.

Wilson is the Global Ball Partner. Wilson is also the Apparel Partner, Maurice Lacroix the Official Timekeeper and Chooks-to-Go the Global Partner of the FIBA 3x3 World Tour 2022.