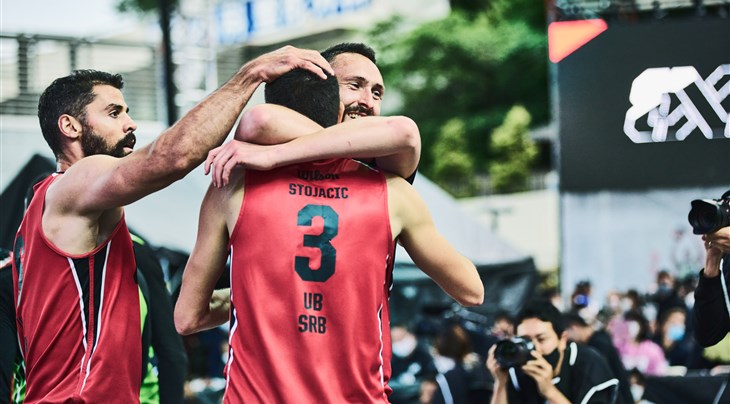 MANILA (Philippines) - No.1 seed Ub Huishan NE (SRB) will aim to silence the home fans on Day 1 at the Manila Masters as they start their quest for back-to-back titles to open the FIBA 3x3 World Tour 2022.

After claiming the Utsunomiya Opener in memorable fashion, Ub made an early statement to reinforce their credentials that they are the team to beat in Manila on May 28-29.

The Serbs top Pool A, which also features Zavkhan MMC Energy (MGL) and Cebu Chooks (PHI). Ub, of course, will be favored to progress with Utsunomiya Opener MVP Strahinja Stojacic even meaner and nastier than when we last saw him, while his partner in crime Dejan Majstorovic remains one of the great clutch shooters of all time.

But Ub should get an early test against in-form Cebu Chooks (PHI), who will be boosted by their army of crazy passionate fans. The Filipinos broke a long drought for the Philippines on the pro circuit with victory at the Super Quest event in Manila.

Their chances of upsetting Ub rests with deadly duo Mark Tallo and Mike Harry, who were dynamic in that triumph and need to produce something similar at their favored half court in Manila. Pool B is highlighted by a blockbuster between No.2 seed Antwerp (BEL) and No.7 seed Sansar MMC Energy (MGL).

The Belgians are desperate to break a title drought on the World Tour and win their first Masters having once again fallen at the semis in Utsunomiya although they played the tournament without a sub.

Thibaut Vervoort aka 'Must See TV' had better reviews than We Own This City as he topped the scoring charts in Japan. And good news, he will be able to rest from time to time as the Belgians will play with 4 players in the Philippines.

It means Sansar's walking bucket Anand Ariunbold will need to heat up if the Mongolians are to cause an upset.

Sansar will hope to rediscover their best having gone off the boil since finishing runner-up at Asia Pacific Super Quest 2022.

The third team in the group will come from a qualifying draw, featuring Yokohama (JPN), Auckland (NZL) and Melbourne (AUS).

Pool C should be crowned the 'Group of Death' and features potentially the best game on Day 1 between powerhouse and No.3 seed Liman Huishan NE (SRB) and emerging Warsaw Lotto (POL).

Liman were heartbroken after falling to Ub in an OT classic in Utsunomiya and face a tough early test against Warsaw, who are determined to make a splash in 2022 after turning professional.

The extra dedication has helped the Poles steal the show early in this pro circuit, especially dynamo Przemyslaw Zamojski who will be aiming to out duel fellow sniper Stefan Kojic.

Be careful, though, it might not just be a two-horse race with Gurugram 3BL (IND) boasting the 'Bearded King' Bikramjit Gill, ball wizard Inderbir Gill and former number one Slovenian Blaz Cresnar aka 'Birdman', who's making his big 3x3 comeback.

Zaisan has the mental edge having taken down Ulaanbaatar in the final of the Ulaanbaatar Super Quest earlier in the month, where Gan-Erdene Gantsolmon produced an all-time epic performance to stamp himself as a young star in the making.

The 22-year-old has been so unstoppable that Zaisan are dreaming big and they hope to once again knock off Ulaanbaatar, who have a pair of runner-up finishes this season after adding Canadian 3x3 legend Steve Sir.

The former Edmonton star returns to the World Tour, where he will prove that he can still shout yessiirr! It doesn't matter how sunny Manila will be, we know Sir is going to make it rain.

Rounding out a tough group are Manila Chooks, who split their two games against Zaisan this season

The Filipinos have been in solid early season form with semi-final finishes at Super Quest events in Manila and Ulaanbaatar. Their chances of getting into Day 2 rests with duo Henry Iloka, who has been a beast inside, and sniper Chico Lanete.

And, of course, they will have the support of rowdy fans, who always bring the energy and ensure the atmosphere will be lit as the World Tour returns to Manila for the first time since 2015.