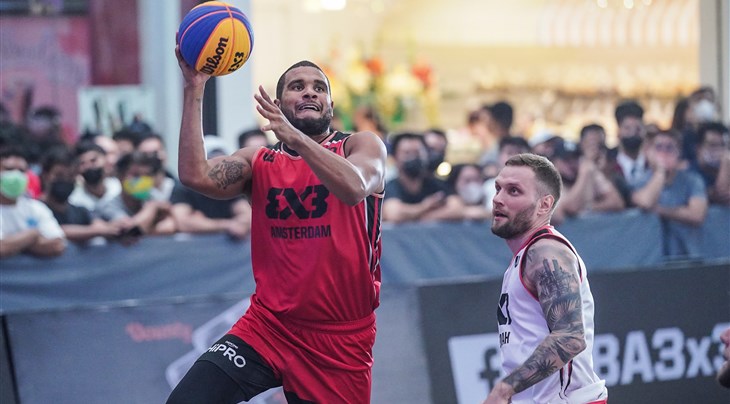 CAPIVARI DE BAIXO (Brazil) - No.1 seed Amsterdam HiPRO (NED) will be seeking a first title on the FIBA 3x3 pro circuit this season at the Capivari De Baixo Challenger 2022 on November 12-13.

The Dutch Masters headline a strong 16-team draw as the pro circuit heads to South America with two tickets to the Hong Kong Masters up for grabs.

One thing Amsterdam has is consistency. They've made the semis 7 of 10 events this year but, unfortunately, have no titles to show.

It's frustrating for Amsterdam, who have ambitions to be at the top of the 3x3 tree but just can't be ranked amongst the absolute best without silverware.

They have a good chance here as the top seed with hot-shooting duo Dimeo van der Horst and Arvin Slagter leading a strong Amsterdam line-up.

They combined for 70 points the last time we saw them in Cebu with Slagter deadlier than Caipirinha with 40 points and if he heats up Capivari De Baixo, then Amsterdam might paint the town orange.

No.2 seed Sakiai Gulbele (LTU) have turned things around in 2022. Previously they were hot or cold but they've made deep runs in the last four events they've played with Marijus Uzupis and Aurelijus Pukelis two of the best gunners on the circuit.

There is a lot at stake for No.3 seed Belgrade Partizan who are fighting for their lives to make the cut for the 12-team Abu Dhabi Final. They are currently 12th on the World Tour standings and will be desperate to qualify for Hong Kong.

Their chances of grabbing one of the two tickets available will be strong if Ivan Popovic can pop from deep.

After a runner-up finish in Utrecht, Paris (FRA) mean business and while they haven't quite matched those heights since, they've still done enough to warrant being labelled a favorite.

But they'll face an early test against NY Harlem (USA) who made the semis in Paris with hot-shooting Dominique Jones and Kidani Brutus combining for 45 points in the team's only appearance on the World Tour this season. When they get on a roll, the dynamic duo pack a one-two punch and if they get hot then NY Harlem could be celebrating a first title of the season.

There are dark horses in this draw starting with Chicago (USA) who can eye a giant-killing run if sniper Craig Moore keeps going bang, bang. They haven't quite gotten it together this season but an early upset over Sakiai in Pool B might do the trick.

Utsunomiya BREX (JPN) have also teased and keep reaching Day 2 before falling short at the quarters. But speedy Yosuke Saito has more tricks than Neymar and might be able to power the Japanese deeper than they've been all season.

One to watch will be Rouen (FRA) who boast highlight machine Lorenzo Thirouard-Samson. The 21-year-old was named MVP of the FIBA 3x3 Nations League to cement his standing as one of the hottest talents in 3x3.

For a local flavor, that we just can't ignore, Sao Paulo DC (BRA) and Joinville (BRA) each have two players coming off winning bronze for Brazil at the recent FIBA 3x3 AmeriCup 2022.

They'll enter with swagger and might just be able to feed off the crowd and cause an upset or two.