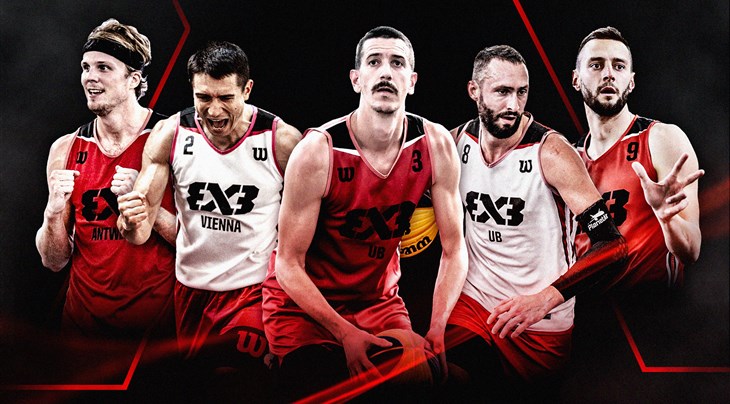 MIES (Switzerland) - There were insane scoring binges during the FIBA 3x3 World Tour 2022 with plenty of walking buckets filling up the stat sheets.

Here are the top scorers this season.

The No.1 ranked player was also our top scorer as he finished 42 points clear of sidekick Dejan Majstorovic on the same number of games played. There's good reason why he won the World Tour 2022 regular season MVP.

'Doctor Strange' was 'Doctor Shot Maker' as he was unstoppable on the half-court, especially from inside the arc where he shot 74%.

When he drives to the rim it's a wrap because the 6ft. 6in (1.98m) athletic marvel can jump over anybody silly enough to get in his way.

When his two-piece is falling, he shoots at a decent 30%, then there really isn't anything to do except enjoy the No.1 ranked 3x3 player go to work and put on a show.

'The Maestro' has not lost his magical touch as he cements his legacy as one of the best ever 3x3 players.

The former Novi Sad superstar has inspired Ub to become the best team in 3x3 as he became the perfect partner-in-crime for talisman Stojacic. He's still a deadly sniper as his 32% from 2 indicates and just don't foul him because he's almost perfect from the line at 93%.

His best performance was at the Manila Masters, where he racked up 33 points in an MVP performance to lead Ub to the title.

After issuing a reminder why he's nicknamed 'The Maestro', don't bet against Dejan Majstorovic once again turning back the clock in 2023.

This was the season the lethal lefty became a star in his own right. He's now part of Ub's big three with Brankovic able to carry the team when Stojacic or Majstorovic don't have it.

He's absolutely deadly from downtown with the 28-year-old shooting a crazy 39% from 2, which was the highest percentage for anyone shooting more than 40 twos during World Tour 2022.

At 6ft. 7in (2m), Brankovic also has the size to get to the rack making him an all-round threat. He proved he was a star when he shone brightest at the showpiece FIBA 3x3 Abu Dhabi Final in a breakthrough on the big stage, as he collected the MVP.

You feel it's the first of many MVPs for Brankovic.

A rewired 'Mr Robot' entered a time warp back to his peak years at Liman when he was arguably the best player on the planet.

Stojacic enjoyed the greatest comeback since Happy Gilmore beat Shooter McGavin as he led Vienna's rise to near the top of the World Tour.

His greatest moment was when he scored an insane 50 points to win MVP at the Paris Masters to inspire Vienna to their first Masters title.

Stojacic nearly topped that when he scored 49 points at the Abu Dhabi Final as Vienna narrowly fell short of the season-ending title.

Maybe the greatest pure scorer 3x3 has seen, we're all so happy to see Stefan Stojacic once again ballin' on the half-court.

'Must See TV' was even better in season two after being the best newcomer in 2021. Vervoort's an inside-outside force, who can posterize on one play then drain a dagger from the logo on the next.

When the 24-year-old is rolling, no one makes scoring look easier than this bucket getter like he did in Debrecen where Vervoort scored 29 points to take home the MVP in Antwerp's breakthrough victory.

We just know season three will be must see tv.

When Flight KLM landed on the half-court mid-season, Lasmanis went on a tear to finish with a ridiculous average of 8.5 ppg - the highest by anyone who played more than 20 games.

Averaging 8.5 ppg is probably something like 40 a game in basketball so you just know Lasmanis did something trippy. The Olympic gold medal hero never looked more dangerous as he combined with sidekick Nauris Miezis to lead Riga on an unbelievable 27-game win streak.

The 28-year-old is right at his peak but you know he'll be working on creating new tricks during the off-season in a bid to get even better.