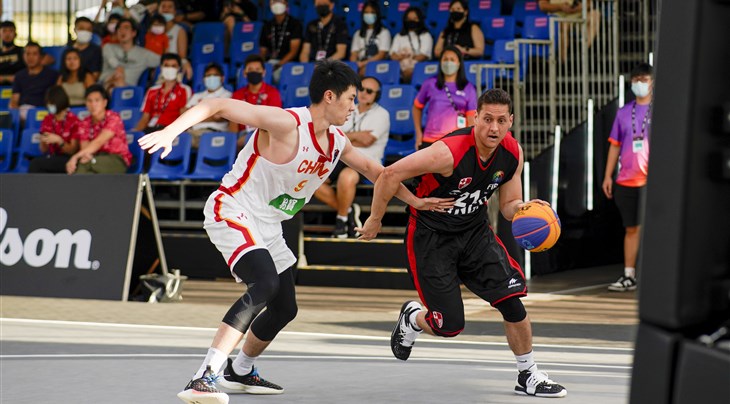 NUKU’ALOFA (Tonga) – Bouncing back from Covid lockdowns, Tonga Basketball have their sights set on 3x3 development with the national men’s team accepting the challenge to participate at the FIBA 3x3 Asia Cup in Singapore recently.

Tonga Basketball see 3x3 as a priority for basketball growth in the country, which compliments FIBA’s global strategy to empower national federations and enlarge the FIBA Family.

Men’s Tongan superstar all-rounder, Siale Bain-Vete, is the number one ranked 3x3 player in Tonga and enjoyed the opportunity to represent his country in their first international 3x3 appearance outside of the Pacific Games.

“While we didn’t get the results we were hoping for, we learnt a lot from being exposed to the high level of competition,” Bain-Vete said. “Being able to meet and make new contacts with coaches and teams from other federations was invaluable. This type of opportunity will help us as Tonga, look and build towards competing in 3x3 at the Pacific Games in 2023.” Bain-Vete is modest about his number one ranking and just wants to see more Tongans picking up a basketball and he believes that 3x3 will play a big part in developing players and fans within the country. “The game (3x3) is much more accessible for players as you need less numbers to play and less equipment. I think 3x3 can play a significant role in getting more people involved in basketball in Tonga, especially due to our limitations of a good quality indoor basketball facility.”

Echoing Bain-Vete’s sentiments, Viliami Foketi is ranked number three for 3x3 in Tonga and rated his experience in Singapore as one of the best and sighted development opportunities as massive steps for basketball growth in Tonga.

“My experience at the Asia Cup was phenomenal, Foketi said. “Singapore is a fantastic country to host the tournament and in conjunction with FIBA, was quite professional in the way it coordinated the tournament and managed the teams. As it was our first tournament, we had little to no expectations both on and off the court. I was proud of how we competed, especially with the narrow loss in overtime to Sri Lanka, and it was ultimately a great learning experience for us.”

“I think the explosive, fast-paced nature of 3x3 endears itself to viewers and players alike for much of the same reasons and Tongans are no exception. The games are shorter, so fans stay engaged and the shorter time constraints also make the competition more thrilling and intense. Additionally, players on the court are forcibly given the autonomy to coach themselves, thus having more of a license to make mistakes, be creative and showcase their skills.” There is no mistaking that the fast past nature of 3x3 will see basketball evolve in countries such as Tonga, and with players like Bain-Vete and Foketi leading the way with glowing endorsements, what a time to be playing ball in Tonga.

“The 3x3 style of play is both physical and intense which makes it exciting for players and fans alike. Playing 3x3 always takes me back to when I first started playing in streetball tournaments as a kid, so I absolutely love it. The game is fast, fun, and physical. I also love that we get to hoop with music playing in 3x3,” Bain-Vete concluded.