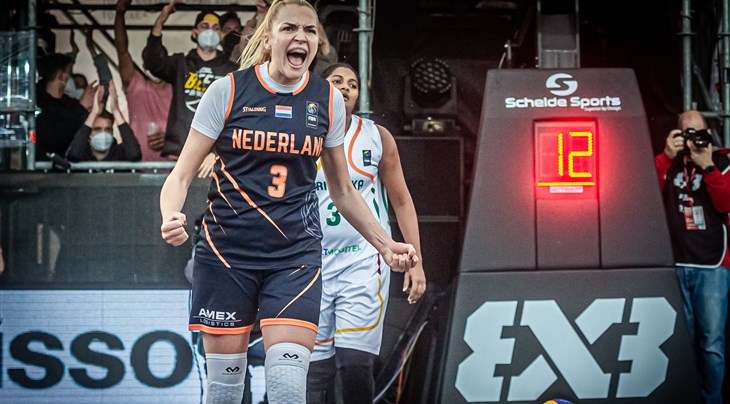 TEL AVIV (Israel) - The action heats up in Tel Aviv on June 3-4 with coveted places up for grabs for Europe's biggest 3x3 event on the continent.

Switzerland are No.3 ranked but probably have the most firepower in the draw. You know these dudes who double for the always entertaining Lausanne on the pro circuit.

So you already well know that Gilles Martin will end up in our top 5 plays and so too Westher Molteni aka 'King Wes'. No.1 seed Germany boast the country's top ranked player Alan Boger and strong man Shawn Gulley who you might have seen bulldoze his way through defenders on the pro circuit for Dusseldorf.

The Germans have top billing but No.2 France love the international stage and are led by 24-year-old big fella Jules Rambaut, who will star for Team Paris on the pro circuit and was part of France's quarter-final run at last year's Europe Cup on home soil.

The Netherlands have long been a force in the women's game and deservedly start favorites here.

The Dutch have a nice blend of experience and youth with Loyce Bettonvil relishing being the leader, while 22-year-old talent Noortje Driessen is on the cusp of going up a level having gained experience representing her country. No.2 seed Lithuania clearly enjoy Tel Aviv after a runners-up effort there just last weekend in the Women's Series. It was a highly impressive performance from the hoops power who upset European fancies Germany and Spain in the pool play.

Watch out for Kamile Nacickaite, who had a light- out performance in Israel where she led her team in points and player value in the country's best-ever result on the Women's Series.

They'll be looking to continue the momentum.

It's a new generation for No.4 seed Slovenia, an OG 3x3 nation whose players are 26 and younger. We hear the baton is being passed to a pair of 22-year-old excitement machines Jure Licen and Jakob Strel and we can't wait to see what they've got.

Another impressive young team is host Israel, who might loom as a dark horse through being in their home comforts, while Ukraine have a hero from their runner-up finish at FIBA 3x3 U23 2019 with Anton Musiienko hoping to again light it up on the international stage. Host Israel clearly enjoy playing on home soil after showing encouraging signs during their quarter-final run at the recent Women's Series stop. They had a strong win over Mongolia and were further encouraged by a narrow loss to Netherlands in the pool stage.

They were brilliantly led by towering Alexandra Cohen, who dominates the paint and if she gets going down low then Israel are a chance at a deep run. Another dark horse could be Ukraine, who made the quarter finals at last year's Europe Cup and boast dynamic Nataliia Tsiubyk, one of her country's best players and the 24-year-old might just break out on the big stage.

In the men's category, the winners of the semi-finals will qualify to the Europe Cup.

Besides that, the best third in the men's category and the best fourth in the women's category (comparing the Romania and Israel Qualifier) will also earn a ticket to Graz.