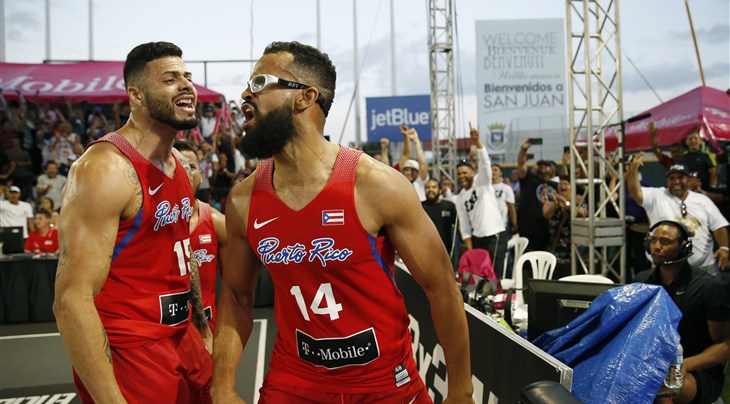 ANTWERP (Belgium) - The title contenders at the Crelan FIBA 3x3 World Cup 2022 are well known but there are other teams eyeing silverware and hoping to shock the competition on June 21-26.

Here are the top six underdogs who loom as dark horses at 3x3's showpiece national team event in 2022.

The Puerto Ricans were OGs in 3x3, but fell off the map as the standard and depth improved.

But they memorably came roaring back on the half court game in 2021 with San Juan PCI Group lighting a fuse under the World Tour and there was a knock on effect at international level with Puerto Rico finishing fourth at the first ever FIBA 3x3 AmeriCup 2021.

They enter Antwerp as the 9th seed, but maybe No.1 in swagger with a foursome believing they can beat anyone on their day.

Their confidence might just be justified with Puerto Rico boasting cold-blooded Angel Matias, who has wings attached in the clutch, and big fella Luis Hernandez who is so strong that he really should have his own Marvel franchise.

Puerto Rico won't fear anyone and that makes them a dangerous underdog.

Everyone's favorite underdog just has to be on this list. But Mongolia - whose success on and off the half court has made them a fan favorite - loom as more than just a feel good story.

They are ready to make a serious mark on the biggest stage after their slew of World Tour teams have had serious workouts so far on this season's pro circuit.

Mongolia have important chemistry and an in-form young gun lighting up the tour - Anand Ariunbold who is a flame thrower capable of scoring from any angles. If you haven't heard yet, the 25-year-old might just be the hottest property in 3x3 right now.

Anyway, whether AA makes the final roster or not, the team is so deep, underdog Mongolia will make some serious noise in Antwerp.

The Tall Blacks might be deemed a surprise on this list. They were, after all, the last men's team to qualify for Antwerp after surviving a tough qualifier in Doha.

But there's one reason they should be feared by opponents - Tai Wynard who if you've forgotten is so strong that he would not look out of place on his country's famous rugby team - the all-conquering All Blacks.

The 6ft. 10in (2.08m) hulk tore up the competition in Doha in his 3x3 comeback in a reminder that he's best at dominating the half court. Wynard was clutch in the thrilling final against Iran to regain his crown as New Zealand's 3x3 talisman.

After injuries plagued his promising career, which saw him once play for famous collegiate Kentucky under the watchful eye of legendary coach John Calipari, Wynard is back and looking to make up for lost time in Antwerp.

If he does, underdog New Zealand - who so often punches above its weight in sports -might just cause a shock or two.

The No.16 seed are not as fancied as others but those watching last year's AmeriCup know Brazil mean business.

Led by the inspirational Vanessa Goncalves aka Sassa, Brazil defeated highly-rated Dominican Republic and Argentina in pool play before an upset over top seed Canada in the semis sent shock waves through 3x3.

The 5ft 11in (1.81m) Goncalves returns to steer the ship in Antwerp and her brilliance could fuel a giant killing run for Brazil seeking a first ever World Cup medal.

The 8th seed have strong history in 3x3 but been taken over by new powers as the depth of women's talent grows.

Romania are clearly tired of being overlooked as they launch a bold plan to return to 3x3's elite. They are in good form having recently qualified for the FIBA 3x3 Europe Cup 2022, where their star Sonia Ursu continued to prove she can legit do it all on the half court.

And Ursu has plenty of help through sharpshooter Ancuta Stoenescu, another Tokyo Games Olympian who opponents should never leave open under any circumstance.

It all means that Romania can't be underestimated.

11th seed Israel fly under the radar ahead of the World Cup, but might just land a blow or two. The reason for the optimism? Their encouraging performance at home during the Women's Series first stop of the season in Tel Aviv, where they made the quarter-finals.

Israel enjoyed an eye-catching win over Mongolia and almost made it two from two only to fall narrowly short of European power the Netherlands. Their strong campaign ended in the quarters against Lithuania but the signs were good.

Especially when towering Alexandra Cohen was a walking bucket as she lit up Tel Aviv with 26 points from just 3 games and the 6ft. 5in (1.96m) dynamo is highly capable of scoring from inside and outside.

You just know she'll cause all sorts of problems in Antwerp and that might just help underdog Israel make a surprising run.