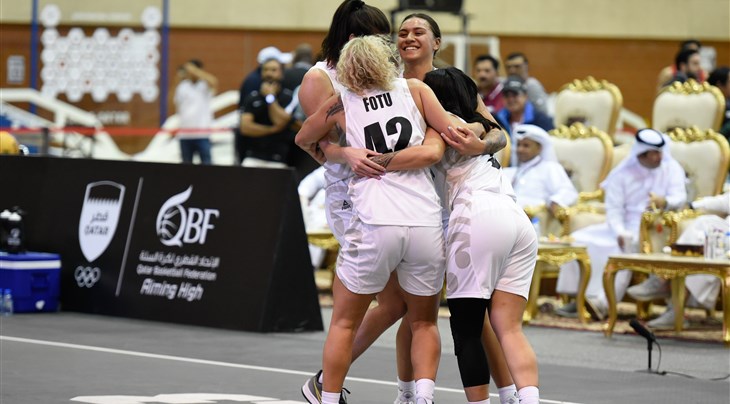 But there was no panic because New Zealand embraced the task and gelled immediately to romp through undefeated and secure the last ticket to the FIBA 3x3 World Cup 2022.

Unlike their male counterparts, who survived a thriller in the final against Iran, New Zealand sailed through basically untroubled apart from a minor scare in the semi-final against Kazakhstan where they won 12-8.

It was an accomplishment made even more impressive with coach Justine Reed unable to make the trip due to Covid-19 protocols. "It was a testament to our team that we were able to pull through and adjust to the situation," said star Tiarna Clarke.

"We were still connecting with coach when we could but she had trust in us to handle things. Our chemistry felt like second nature and we were all really supportive of each other which was key to our success.

"We came in as the hunters and had a job to do, so to achieve that feels amazing."

Another key reason for New Zealand aka the 'Tall Ferns' doing so well was Clarke turning into a 3x3 inferno as she breathed fire like the mother of dragons in Games of Thrones.

The 23-year-old led all scorers with 30 points, including a game-high 10 to lead New Zealand to a 19-12 win over Uzbekistan in the final. Having played in the Women's Series 2019 the sharpshooter obviously enjoyed being back in 3x3 - a game that appears made for her.

"I love playing 3x3 because you get to showcase your skills and there is much more freedom. It's like playing in the backyard," she said. "But you have to be so focused because the transition from defense to offense is so quick that you can't dwell on any mistakes." Clarke hopes to be part of New Zealand's line-up at the World Cup where this proud small nation will once again aim to punch above its weight.

"New Zealand always dreams big and there is no reason why we can't play well at the World Cup," she said. "It will be a huge platform for us to showcase our talent because 3x3 is really growing in New Zealand and it's a chance for the girls back home to see where this game can take you."

With Clarke draining twos like free throws, New Zealand women's team are fast emerging as they issue an ominous warning ahead of Antwerp.