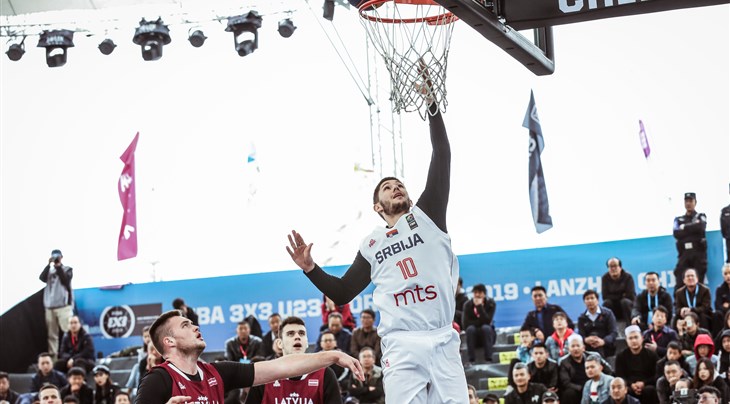 UTSUNOMIYA (Japan) - For four years, ever since he dedicated himself fully to 3x3, Dusan Samardzic had the best education imaginable during continual hardnosed training sessions with Serbia's greats.

At first, the 6ft. 4in (1.93m) Serb felt slightly overawed having to test his talents against the likes of Dejan Majstorovic and Stefan Kojic but he never backed down.

Through the years he gained complete respect from his 3x3 idols who were keen to pass down words of wisdom to Samardzic, who starred at the FIBA 3x3 U23 World Cup 2019 with 40 points from 7 games in Serbia's bronze-medal run.

"I got to train with a lot of great players and I wanted to watch them and study how they trained and behave," Samardzic said. "It wasn't just things on the court. I saw how competitive Dejan (Majstorovic) is at everything he does. He hates to lose. I've improved my game a lot being around them."

The 26-year-old is sharing his wealth of knowledge to his new teammates on Utsunomiya Brex, who are hoping to rise up in 2022 and continue Japan's momentum in 3x3 after the East Asian country's men's and women's teams impressed at the Tokyo Olympics.

With his compatriot Dusan Popovic giving him the sales pitch, Samardzic signed on to play for Utsunomiya a year ago but could not join his new team due to the Covid-19 pandemic.

But, finally, he made the journey earlier in the month and now lives in Saitama, which is around 30km north of Tokyo. There has been no home sickness for Samardzic who has embraced Japan's famous culture and food.

And he's certainly not Bill Murray from Lost In Translation. The Serb is grasping Japanese impressively and he's able to sound proficient with several phrases he's already mastered. He's clearly having fun, but Samardzic knows he not in Japan for a holiday.

"We've been training hard as this is a professional job and we train every day and spar against other teams two-three times a week," he said.

The sharpshooter is determined to lift Utsunomiya, who were starting to impress during the World Tour in 2019 where they made the semis at the Jeddah Masters before their momentum was halted due to the pandemic.

The recruitment of Samardzic is hoped to be the missing piece in an Utsunomiya team featuring Popovic and Japanese players Yasuo Iijima and Yosuke Saito. He predicted they would play a fast-paced attacking style, which magnified his importance.

"My strength is defense. I like doing the things which are important for success," he said. "But I can also score when needed. You have to be versatile in 3x3."

As the World Tour season opener approaches in Utsunomiya, Samardzic is feeling bullish about the prospect of Utsunomiya Brex being the breakout team this season and possibly creating history by being the first Japanese team to go all the way at a Masters.

"We want to firstly qualify for as many events as we can and then hopefully we can win a title," he said.

While his focus this year is purely on this new adventure, Samardzic hopes impressive performances could move him closer to representing Serbia at the senior level having had a taste three years ago in China.

"I had a lot of pride wearing the jersey at the U23 World Cup because there have been so many great players who represented Serbia over the years," he said.

"It was an amazing feeling and I hope to get the chance again in the future."