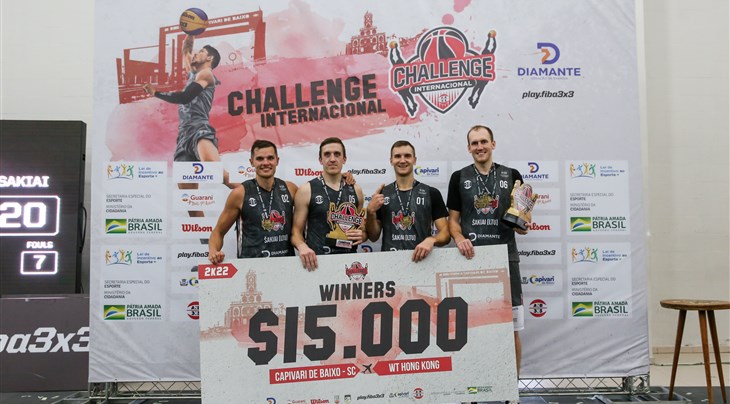 CAPIVARI DE BAIXO (Brazil) - Sakiai Gulbele's (LTU) impressive second-half of the season continued after they won the Caprivari De Baixo Challenger on November 12-13, 2022 and booked a ticket to the upcoming Hong Kong Masters.

They were: No.1 points scored and No.2 best shooting value

The lethal Lithuanians have been on a hot streak since winning the Eaubonne Challenger in August. They've made at least the semis in four events since then culminating in their triumph in Capivari De Baixo.

Sakiai had a perfect record but it wasn't easy as they were pushed every game, including a day one thriller against Chicago (USA) where sniper Marijus Uzupis created a heat wave in Brazil with 13 points and the game winning two-piece.

They had a more comfortable quarter-final win over NY Harlem (USA), impressively restricting the firepower of the Americans, before edging past Belgrade Partizan (SRB) in the semis.

They saved their best for last with tough defense to restrict Amsterdam HiPRO from deep as Sakiai claimed their third Challenger title of 2022. Uzupis pulled out his famous guns all event and teamed up with MVP Aurelijus Pukelis for a combined 72 points.

The deadly duo issued a reminder that they can match it with any pairing on the pro circuit as Sakiai Gulbele made another statement.

So close yet so far for Amsterdam, who just fell short of a first title in 2022. But they again proved their consistency with another deep run, where they weren't really challenged until squeezing past Paris (FRA) in a tense semi-final.

Their shooting from beyond the arc went unusually cold in the final, but Amsterdam did a lot of things right leading up to the decider to finish third in points scored and second in fewest points allowed.

Dimes does it all: In further proof that he's one of the very best players on the circuit, Dimeo van der Horst filled the stats sheets with a monster performance in Capivari De Baixo.

The 31-year-old was third in player value and scoring, while he topped highlights and key assists - living up to his nickname of 'Dimes'. He was electric all tournament and this Dutch Master is doing everything he can until Amsterdam goes home with a W.

Amsterdam defeated Sakiai in a thriller at the Lausanne Masters, but the Lithuanians turned the tables with their dynamic Uzupis - Pukelis duo combining for 16 points to outscore the Dutch.

But it was Paulius Beliavicius who got the ball rolling by going bang, bang as Sakiai skipped out to a 6-2 lead. Uzupis then locked and loaded with three quick points in what was proving an anti-climax of a contest.

Amsterdam, however, aren't quitters and they clawed back with sniper Arvin Slagter overcoming a slow start to find his radar with consecutive two-pieces. Suddenly it was just a one-point game but that did not rattle Uzupis, who responded with two splashes from deep in what felt like a shootout contest.

Van der Horst tried to keep Amsterdam in the game with two pretty layups, but Sakiai had the answers as Aurelijus Pukelis came alive in the clutch with his team's last four points to ensure the Lithuanians earned another impressive W.

The reward: Two tickets to the Hong Kong Masters

Key Stats:
- The top four seeds made the semis and seven of the top eight seeds made the quarters with eighth seed Rouen (FRA) bouncing after a winless day one.
- Paris had a strong semi-final run thanks largely to Franck Seguela, who finished fourth in scoring, second in rebounds and he had a double-five with 10 points and 7 rebounds in a quarter-final win over Chicago.
- Šakiai and NY Harlem's offensive explosion was evident when they played the second quickest game of the tournament in a quarter-final lasting 7'47''.