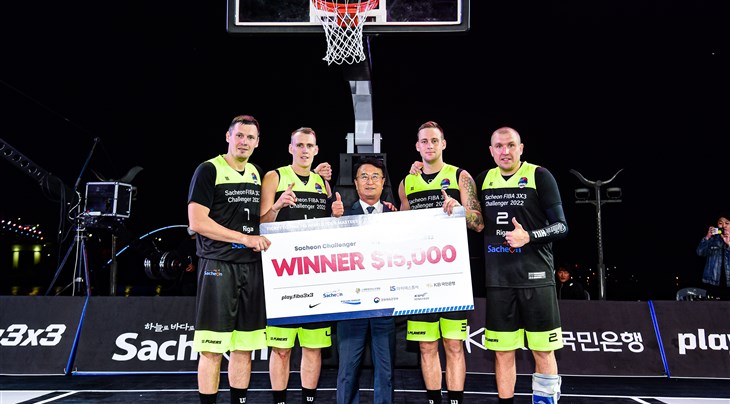 In a draw featuring the top three ranked teams in the world, the Latvians came out on top adding to their recent Masters wins in Montreal and Cebu.

They were: No.1 points scored and No.2 in best shooting value and fewest points allowed.

Reloaded Riga have predictably returned to the top tier of 3x3 after Karlis Lasmanis landed Flight KLM back on the half-court. Just two weeks after their thrilling victory in Cebu, the Latvians added another title but their four Olympic gold medalists were made to work.

After overcoming Warsaw Lotto (POL), who have found form, in a tense Day 1 OT contest, Riga ended Liman Huishan NE's (SRB) insane 28-game winning streak in Challengers in a semi-final classic. The rivals have played many amazing games over the years and this can be added among the best.

Riga needed to do everything right to end Liman's dominance and they did exactly that with superstars Lasmanis and Nauris Miezis combining for 18 points to outplay the Serbian stars. The Latvians faced elimination down 20-19 but you know who they called with the game on the line.

Like he did in Cebu, Miezis proved he was one cool customer in the clutch to nail the two-piece and send Riga to the final, where they had a more comfortable win over in-form Vienna (AUT).

Miezis won his second MVP in as many weeks after finishing No.1 in most of the major categories, including player value (44.6), highlights (23), key assists (13) and rebounds (26).

He had plenty of support from partner-in-crime Lasmanis, who led everyone in scoring (39), as Riga once again made a statement in the business end of the season, while celebrating Edgars Krumins' birthday in style.

After their memorable breakthrough at the Paris Masters, Vienna entered Sacheon with more swagger than a K-pop singer. Their confidence was justified as the Austrians cruised into the semis before facing the ultimate test against No.1 Ub Huishan NE (SRB), whom Vienna had beaten in the quarters in Paris.

It came down to the wire before Quincy Diggs proved why he has been such a valuable recruit for them with a spectacular lay-up in the dying seconds to put Vienna ahead. Superstar Stefan Stojacic then produced a crazy block to deny Dejan Majstorovic's attempted buzzer beater from deep.

Vienna prevailed but their celebration was short-lived after falling to Riga in the final.

Spectacular Stojacic: 'Mr Robot' was once again electric to finish second in scoring with 30 points and continue his fairy-tale comeback. He was engaged in a duel with his brother and top-ranked player Strahinja Stojacic in the semis with the ex-Liman star stuffing the stat sheet to finish one highlight short of a triple-five.

Stojacic ran out of gas a little by the final but the once troubled knee seems just fine.

Two of the hottest teams on the pro circuit squared off with Riga having triumphed in the semis in Montreal 21-14 en route to the title. They entered confidently with Krumins putting some icing on his birthday cake with a pair of sweet twos in a fast start.

Quincy Diggs, Vienna's hero in the semis, was still shooting flames with a two followed by a pretty spinning layup to give his team the lead.

But Riga took over mid-game with a 7-0 run with Lasmanis scoring 5 of them to give the Latvians a stranglehold. Vienna answered through Diggs who was still a flamethrower, but Riga had the answers like Iverson.

With the title in sight, Riga's superheroes took over with Miezis finding an open Lasmanis for the two-handed slam. As per usual, Miezis finished it off with a tough step back two to secure another title for a red-hot Riga.

The reward: Two tickets to the Riyadh Masters

Riga and Vienna earned their tickets to the Riyadh Masters on November 11-12, 2022.

They join Antwerp (BEL), Jeddah (KSA) and Doha QSC (QAT) as teams to have qualified for the 10th Masters of the season.

Key Stats:
- The top four seeds made the semis but No.1 Ub Huishan NE's recent cold streak continued when they lost a thriller to Vienna in the semis, while No.2 Liman's incredible 28-game winning streak in Challengers finally ended in a heartbreak to eventual champs Riga in the final four.
- Warsaw's walking bucket Przemyslaw Zamojski went up a gear with 30 points in just 3 games with his masterpiece being a double-five - 12 points, 9 rebounds - to dominate Seoul (KOR) in the pool stage.
- Riga's path towards the title started in tough fashion when they were pushed by Warsaw Lotto in pool play only for Agnis Cavars' buzzer beater to end the game lasting 11"14' - the second longest of the tournament.