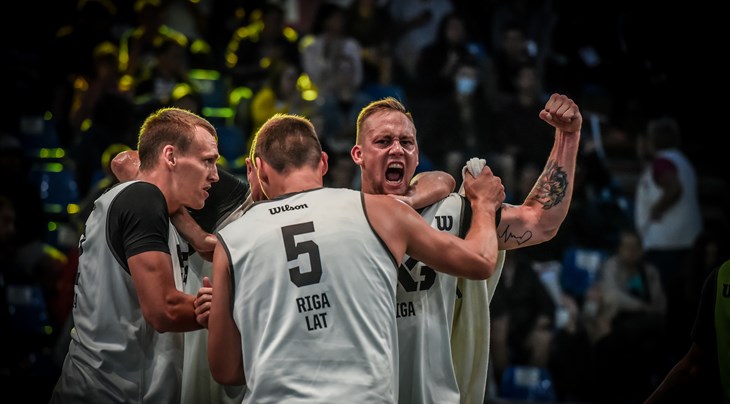 Lasmanis aka 'Batman' will put his cape on for the first time this season and the 28-year-old's presence should lift powerhouse Riga, who are seeking their first title of the year.

Riga have their famous foursome back as they look to avenge a tough defeat to rising Americans Omaha3Ball, who won their first major title on the 3x3 pro circuit with a thrilling victory in the final of the recent Quebec Challenger.

MVP Malik Hluchoweckyj and Dylan Travis were unstoppable in Quebec and will be looking to pour buckets on a full-strength Riga in a mouth-watering contest headlining Pool A, which also features No.9 seed Lublin Lotto (POL).

The lethal Lithuanians will hope they are firing again in Montreal (where they won the only Masters of their career in 2019) because they face an early test in Pool B against dangerous No.7 San Juan (PUR), who struggled at the Lausanne Masters.

But these Puerto Ricans are former champs on the World Tour and boast Angel Matias, who can perform miracles on the half-court.

While Winnipeg (CAN) will be hoping to make the group much more than a two-horse race.

Pool C is highlighted by an all-American showdown between No.3 seed Princeton (USA) and No.6 Chicago (USA). Long-time favorite Princeton have recaptured their best but are still yet to claim a title this season.

Princeton looked the goods at the Debrecen Masters after upsetting eventual champs Antwerp (BEL) on Day 1 before exiting in the quarters. But the signs are good of them making a deep run back on North American soil with powerful Isaiah Wilkerson poised for a major breakout performance.

If any team should know their moves it will be buddies Chicago although Princeton won the bragging rights in Quebec with a 20-15 quarter-final victory. Ex-Princeton high-flyer Zahir Carrington will be tasked with battling fellow athletic marvel Kareem Maddox in what might prove to be a personal dunk contest between them.

No.11 seed Beijing (CHN) make their season debut and loom as an x-factor in Pool C with much intrigue over the comeback of former Novi Sad star Marko Savic, who is one of the best 3x3 players ever.

The Serbian legend has surely helped mentor former Liman player Peng Yan who is being tipped for big things on his return to the World Tour.

Pool D has an intriguing clash between No.4 seed Ulaanbaatar MMC Energy (MGL) and No.5 Vienna (AUT), who have made four straight Challenger finals as they return to Masters action for the first time since the Utsunomiya Opener.

Filip Krämer and co. will be tasked to fire against a desperate Ulaanbaatar MMC Energy, who have made a trio of quarter-finals in Masters this season. They might just go on a deeper run with Canadian sniper Steve Sir returning home, where he announced his retirement last year... before his successful come back in Mongolia.

The third team from Pool D will come from qualifying.