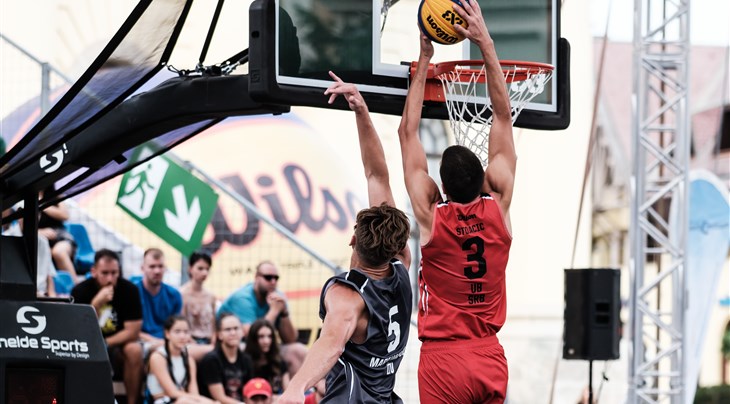 PARIS (France) - The FIBA 3x3 World Tour excitingly travels to France for the first time ever with the Paris Masters on October 7-8, 2022.

Played (with free entrance) at the Carreau du Temple, in the 3rd arrondissement of Paris, all eyes on Day One will be on the return of No.1 seed Ub Huishan NE (SRB) who dominated the start of the World Tour 2022 season with four straight titles before finishing second to Antwerp (BEL) in Debrecen.

They haven't been sighted since on the World Tour as rivals Liman (SRB) and a reloaded Riga (LAT) start making their move. Once again stacked with their usual four-pronged attack, Ub will have a great chance to regain their momentum in Paris but it won't be easy in Pool A against new sensation Utrecht (NED) and compatriots Danube (SRB) who boast flame thrower Bogdan Dragovic.

After spectacularly reaching the semis at home, Utrecht will be out to prove they can perform on the road and they should be the real deal after Worthy de Jong showed he certainly was worth watching after energizing the home fans with highlights galore.

While Ub are hoping to reestablish their dominance, rival Liman want to continue where they left off in Utrecht in their first W on the World Tour 2022.

Liman will bring back that same successful line-up led by MVP Stefan Kojic who was in heat check mode and this 3x3 great should be extra pumped up playing in the historic and beautiful surrounds of Paris.

The Serbs face a Pool B blockbuster with NY Harlem (USA) who have shown glimpses of their best but consistency has been hard to find. The Americans should have an extra pep in their step for their World Tour 2022 debut, especially Dominique Jones or 'Disco Domo' as you know him.

If there is one dude who is born to perform in Paris it's this natural entertainer, while Prebold (SLO) will be eyeing early upsets to shock the world.

Home fans will be making plenty of noise in Pool C action, which sees local heroes Paris (FRA) and Vienna (AUT) meet in what might be a classic contest between two teams showing signs of going up a level.

In their World Tour debut in Utrecht, rising Paris proved they are the real deal with a runners-up finish and Franck Seguela all cash from deep, while 24-year-old dynamo Paul Djoko more than lived up to the hype.

Vienna will be out to slow down this growing French bandwagon and continue their own strong form as the Austrians hunt a first World Tour title. The third team will come out of qualifying.

Princeton (USA) should fancy their chances in Pool D and they've brought familiar faces, including big fella Kareem Maddox who often seems taller than the Eiffel Tower when he's around the rim.

The Americans will be out to continue the tough run of Jeddah (KSA), who crashed in Cebu with a winless campaign and so too Doha QSC (QAT) - the other team in Pool D.

No.5 seed Jeddah have underperformed so far in 2022 but knocking over a strong Princeton might just spark them to life.