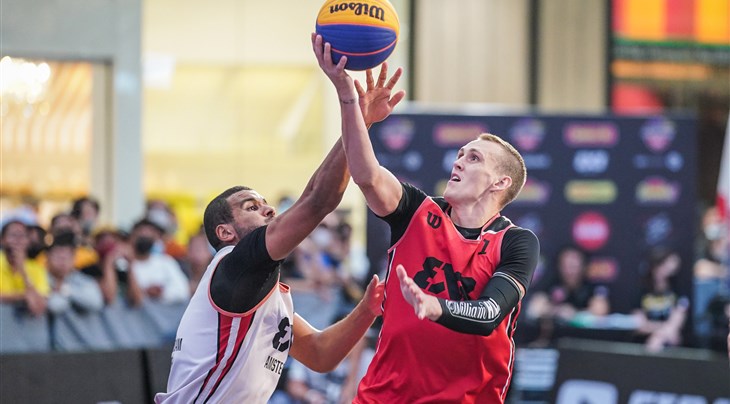 HONG KONG - There are numerous Day One blockbusters in a loaded field for the FIBA 3x3 World Tour 2022 regular season finale at the first ever Hong Kong Masters on November 26-27.

The top eight ranked teams in the world will be in force in Hong Kong ahead of the showpiece Abu Dhabi Final next month.

The most anticipated Day One game is probably the Pool C firecracker between unstoppable Riga (LAT) and Amsterdam HiPRO (NED) in a re-match of the classic semi-final last month in Cebu.

Led by walking bucket Dimeo van der Horst, Amsterdam are out for revenge with the third team in the group coming from qualification.

Top seed Ub Huishan NE (SRB) are looking for their first Masters title since August but will be without superstar Dejan Majstorovic to end their stability. In his place will be Chinese 23-year-old rising star Jianghe Chen, who has played for Ub previously.

The Serbs are in a tough Pool A, which is surely the 'Group of Death', with Ulaanbaatar MMC Energy (MGL) and Cebu Chooks (PHI) looming as possible dark horses.

The Filipinos have a lot to play for. Winning in Hong Kong is the only single way for them to stamp the final ticket to Abu Dhabi (now in possession of Lausanne Sport (SUI), and you wouldn't write them off with superstar Mac Tallo capable of carrying his team on his back.

Liman always bring a star-studded line-up and this is no exception with sniper Stefan Kojic headlining a team that faces a major challenge against Sakiai boasting formidable duo Marijus Uzupis and Aurelijus Pukelis.

The Chinese team impressed with a quarter-final run at the Montreal Masters, where Hanyu Guo and Yuanbo Zhu provided a one-two punch.

Pool C also has another mouth-watering contest between European heavyweights Antwerp (BEL) and Vienna (AUT), who are both looking for their second Masters titles of the season.

Everyone can't wait for the match-up between scoring machines Thibaut Vervoort and Stefan Stojacic in a toe-to-toe battle that should go a long way to deciding the winner of the contest.

The third team of the pool will come from qualification in an absolutely stacked draw to spark this historic event in world famous Hong Kong.