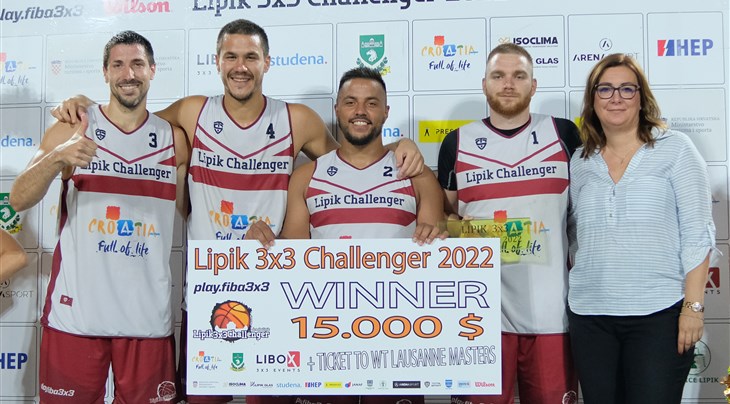 Ever since they finished second at the Manila Masters, Liman Huishan NE are on a roll with 15 straight Ws after victories at the Ultra Sad Challenger, the ING Hamburg Challenger and Lipik.

They were: No.1 points scored, best shooting value and fewest points allowed.

Another tournament, another title.

Liman are hotter than the European summer after winning their third straight Challenger in perfect preparations ahead of the Prague Masters with the Serbs desperate for a W on this season's World Tour to close the gap on rival Ub Huishan NE (SRB).

They trailed 19-16 and appeared set for a shock exit until their trademark fighting spirit kicked in and Liman prevailed 21-20.

It kick-started another dominant run as the Serbs easily beat Ulaanbaatar MMC Energy in the semis then Dusseldorf LFDY in a one-sided final.

FIBA 3x3 World Cup 2022 gold medalist Mihailo Vasic returned after missing Hamburg and didn't miss a beat after playing bully ball in the paint to finish No.1 in points (34) and player value (34.2) to claim the MVP.

Liman Huishan NE were without sniper Stefan Kojic but it didn't matter as up stepped Miroslav Pasajlic who was deadly throughout and proved the world No.2 have insane depth.

They are going to be tough to beat in Prague. The Germans have been knocking on the door for a while, but a deep run looked doubtful after a first up loss to Ulaanbaatar MMC Energy (MGL).

Backs to the wall, Dusseldorf LFDY responded with a 22-9 thrashing of Zagreb (CRO) and their momentum continued on Day 2, where they edged Krupanj (SRB) in the quarters.

It set up a classic semi-final against in-form Fribourg (SUI) pitting two much improved teams against each other. Living up to the hype, the game went down to the wire before Alan Boger put the cape on and scored the last 4 points to get the Germans over the line.

Dusseldorf LFDY ran out of gas against Liman in the final but have sent a message to the rest of the pro circuit.

Landgraf steals the show: We love new stars and Bastian Landgraf is a player to watch after a scene stealing performance in Lipik.

The 27-year-old finished fifth in scoring with 27 points and second in key assists (9) to lead the No.5 seed to the final. He teamed up brilliantly with clutch Boger and Leon Fertig to underline Dusseldorf's depth and range of offensive options.

We keep seeing emerging forces rising in 3x3 and you can add Dusseldorf to the list. If Dusseldorf LFDY was going to produce an upset then they needed a fast start. And Bastian Landgraf was up for the challenge with a couple of tough buckets in the paint.

But he was the only Dusseldorf LFDY player who could get going as Liman made their move by scoring the next six points. Landgraf was a one-man show for the Germans in a desperate effort to keep his team in the game.

It was not nearly enough against a confident Liman Huishan NE firing on all cylinders and they overwhelmed the Germans to flex their muscle. Mihalio Vasic made the paint his personal playground and Nebojsa Kilijan was killing it as the decider became more predictable than Novak Djokovic winning Wimbledon.

Vasic sealed the deal with an open layup as Liman celebrated another title and their winning streak shows no signs of stopping.

The reward: Two tickets to the Lausanne Masters presented by Yuh

With Liman having already qualified, Dusseldorf LFDY and third-placed Ulaanbaatar MMC Energy earned their ticket for the Lausanne Masters presented by Yuh on August 19-20, 2022.

Key Stats:
- Third seed Sakiai Gulbele (LTU) failed to make it out of Day 1 after splitting their pool games.
-Liman's crushing victory in the final proved to be the fifth fastest of the tournament lasting just 8'11'' of playing time.
- Fribourg's Jonathan Dubas continued his hot form to finish 2nd in player value (31.3), 2nd top scorer and 3rd in rebounds (19). He also had an insane triple-five in the quarter-final against Marijampole Mantinga with 10 points, 6 rebounds and 5 highlights.