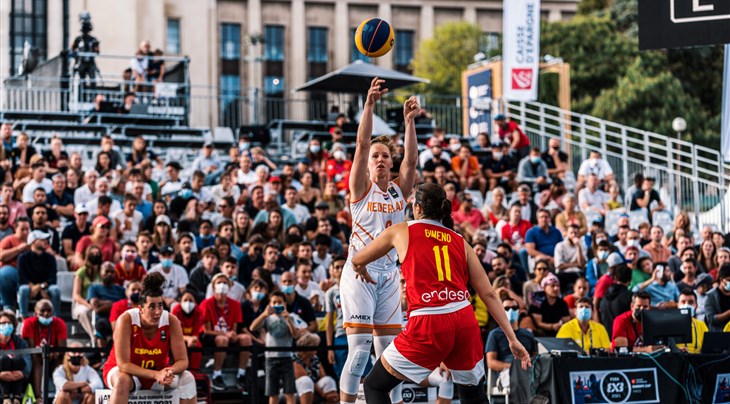 ANTWERP (Belgium) - After a three-year wait, FIBA 3x3's showpiece event will be back with a vengeance in June.

There are 40 teams – 20 each for men's and women's – aiming for 3x3 World Cup glory in Antwerp. We ranked the 8 pools of the FIBA 3x3 World Cup 2022 from top to bottom and it took us only three weeks to be satisfied with the outcome.*

Yep, you guessed it. There's always one at every event and this is it. The 'Group of Death' and deservedly so. All five of these teams competed at the Tokyo Games so think of this group as a mini Olympic event.

It feels almost criminal that two of these teams have to drop out early but that's the way the cookie crumbles.

In case you've forgotten, Latvia are the Olympic gold medalists and you know the names. Karlis Lasmanis, Nauris Miezis, Agnis Cavars and Edgars Krumins have dominated 3x3 longer than the running time of the latest Batman film.

They deserve the ultimate respect and favoritism but this group is more loaded than your dishwasher, so there no guarantees.

The Dutch Masters made the leap in 2021 and are sure to be even better this year led by Dimeo van der Horst who can win games through points or - as his name suggests - dimes.

Want a tip? This might be Poland's time to rise. They have occasionally shown flashes of brilliance but their success was often built on 3x3's greatest showman Michael Hicks, who led Poland to bronze at the FIBA 3x3 World Cup 2019.

But Poland reached the podium at last year's FIBA 3x3 Europe Cup 2021 to suggest they'll be fine post Hicks. And they might have 3x3's newest superstar with Przemyslaw Zamojski dominating in Paris in a taste of what's ahead.

Think it's a three-team race? Think again. Japan were lights out at the Olympics while China too have a boatload of talent and can't be underestimated. Japan twice lost to Latvia narrowly 21-18 in Tokyo, while China beat Poland in what should be a psychological edge.

There is still plenty of time, so make sure you clear out your schedule and watch the 'Group of Death'.

Buckle up, this is going to be wilder than a frat party. Spain were the darlings of 2021 with a truly inspiring turnaround after rebounding from the heartbreak of failing to qualify for the Tokyo Olympics in what was their latest tragic defeat.

But they bounced back with a victory for the ages at the Europe Cup led by Sandra Ygueravide, who enters 2022 as the No.1 ranked player in the world.

But this is a new year and there are no guarantees with this group also featuring fellow powers the Netherlands, who finished fourth on the Women's Series standings in 2019 and 2021, and Canada.

Led by the brilliant Plouffe sisters, Canada finished second on the Women's Series last year and have helped set a standard in the women's game but will be aiming to break their medal drought at the World Cup.

Perhaps they are a dark horse, but Chile are the No.3 ranked team in the Americas and impressed at the first ever FIBA 3x3 AmeriCup 2021.

It's almost unfair to pit maybe the two best teams in the world against one another this early, but that at least ensures an absolutely mouth-watering blockbuster between Olympic gold medalist USA and European powerhouse France.

USA's team is unknown and might not be the same as their brilliant line-up in Tokyo composed of WNBA stars. But you just know the two-time World Cup champs will always be amongst the favorites

France, too, have loads of talent, including former number one Laetitia Guapo set to be among the very best players at the World Cup. And Les Bleues have a point to prove after missing out on a medal in Tokyo and finishing with bronze on home soil at the Europe Cup.

USA and France should get through but Brazil are confident too having won silver at the AmeriCup after thrashing Canada in the semis and only falling at the final hurdle to USA.

Sassa is a dynamo and capable of winning games single-handedly so don't be surprised if they can upset their favored opponents in Antwerp.

After winning the final ticket in Doha, New Zealand are riding a wave of confidence with Tiarna Clarke looming as a breakout star. And don't write off Austria, who are becoming a rising 3x3 nation!

This is another insanely difficult group. Serbia needs no introduction as the 3x3 GOAT nation and they are the four-time World Cup champs. Some critics thought their top dog status was over after they finished with bronze at Tokyo but, of course, they bounced back with gold at the Europe Cup.

No matter who they put out on the court in Antwerp, Serbia are going to be formidable and they will need to be in this tough group. France can be hit and miss but have won a couple of medals at the World Cup previously and a world ranking of No.9 confirms their standing.

This group is much more than a two-horse race between the Europeans. Brazil finished 2021 memorably by winning silver at the AmeriCup while Puerto Rico only just missed out on a podium finished.

And don't write off New Zealand with the 'Tall Blacks' always punching above their weight and if Tai Wynard is in Antwerp then look out! The 6ft.10in (2.08m) dunking machine was phenomenal in Doha and clearly hasn't lost a step after dominating in his return to 3x3 after his phenomenal success mid last decade.

This might just be Germany's moment. They are the No.1 ranked team in the world and have the No,2 ranked player Sonja Greinacher and No.3 Svenja Brunckhorst.

They memorably finished atop the Women's Series last season after winning the Bucharest Final and want to continue the momentum as they seek Germany's first ever medal at the World Cup.

Firstly, they need to get past a competitive field led by defending World Cup champs and Olympic bronze medalist China, who have such depth of talent that you know they will be a contender.

Led by dynamic duo Mai Yamamoto and Stephanie Mawuli, Japan had a superb Olympic run on home soil before narrowly falling short to France in the quarters. They will have big dreams in Antwerp.

While Romania and Lithuania are battle hardened and both ranked in the top 10 in the rankings to ensure this group has an unpredictable feel about it.

Are the USA out for revenge like Keanu Reeves in John Wick? It may have started already after the USA won gold at the AmeriCup to at least provide some cheer on the back of missing out on qualifying for the Olympics.

No matter who laces up for them, USA will be out for gold but face an early challenge against host Belgium who memorably beat them at the Olympic Qualifying Tournament in Graz.

Belgium were the upstarts with a swagger but everyone now knows them and their star player Thibaut Vervoort, who wants to continue being the best show on tv.

They will have pressure in front of their fans but should make it out of this group although Austria have been emerging in recent years with Filip Kramer capable of going up several gears.

While No.1 team in Africa Egypt will be aiming for a giant-killing run.

This feels like a race between Belgium, Mongolia and Poland for group supremacy.

The Poles are the No.3 ranked team in the world after finishing third in last year's Women's Series while Mongolia created history by being their country's first ever team to qualify for a team sport at the Olympics.

Belgium has been shining in youth categories, made it to the 3x3 Europe Cup last year and is likely to be a contender in front of their own fans.

And don't sleep on No.1 African country Egypt and the Dominican Republic.

This ranks here because there aren't really any power teams although maybe we'll be in for a surprise of two? To be fair, we're being unkind to Lithuania who are ranked No.2 in the world and finished with a silver medal at the Europe Cup with Aurelijus Pukelis feasting in the paint.

The lethal Lithuanians should be favorites but other spots are up for grabs. Mongolia have been around the mark for a while but should be watched closely after the recent appointment of Canadian legend Steve Sir as director of player development.

One thing almost certain under Sir's watch: Mongolia's two-point accuracy should be better in an ominous sign for opponents in this group.

*The rankings are entirely subjective and are in no way a true, accurate ranking system. All comments are purely those of the author.