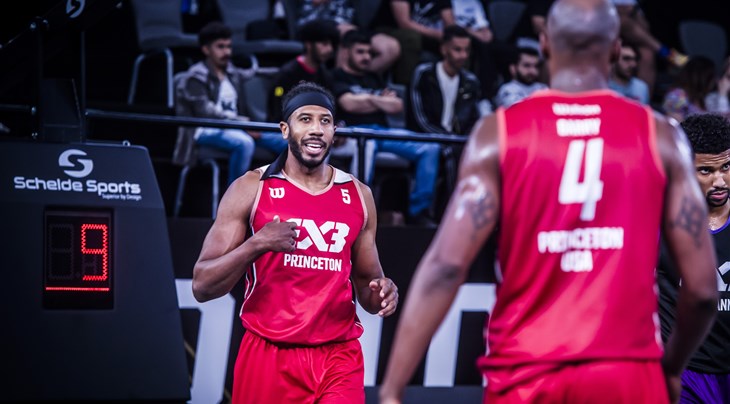 PRINCETON (United States) - After Julien Jaring sank a free throw, he celebrated wildly knowing the Netherlands had knocked out USA from qualifying for the Tokyo Olympics.

With their dreams over and knowing they would face criticism back home for USA's failure for not reaching the Olympics - which is deemed a given in any form of hoops - the devastated American players were at the crossroads.

But in a silver lining, the heartbreak made them stronger as they eye redemption at the Paris Olympics in 2024.

"If I had made the Olympics - same maybe with Robbie (Hummel) - then that would have been my goal completed," said Kareem Maddox, who is the No.1 player in the USA.

And their commitment to 3x3 has made Princeton, who USA members Maddox, Hummel and Canyon Barry represent on the pro circuit, double down on their brand and plan for the future.

Maddox, who has an entrepreneurial bent, likes to think outside the box and tried to find ways to professionalize Princeton as the depth and talent in the 3x3 world continues to soar.

Lifting the standards further, in the aftermath of the Olympic glow, certain teams have become professional through invaluable funding from their federation, national government and/or sponsors.

"I'm not sure people realize we were never a fully pro team," Maddox said of Princeton whose players have full-time days jobs. "A lot of teams are getting really good. We're not getting any younger."

After Maddox's initial conversations with friends and then a lot of research, Princeton have entered a "new movement in sports" and building what is believed to be the the world's first fan-owned professional 3x3 franchise.

Princeton will be a decentralized autonomous organization, commonly known as a DAO, which is an online group with a collective bank account and a mission statement.

The players in recent months have been doing the groundwork through the Krause House DAO, who are pioneers in the sports ownership movement and have an ambitious plan to leverage a DAO to own a NBA franchise.

"This is about professionalising. We are looking at what does 3x3 look like 10 years from now," Maddox said. "Our vision is that 3x3 is going to comprise franchises that are good at operating teams like in NBA and Europe.

"We can have a miniature franchise and operate it with a DAO. We can share ownership with people who traditionally have only been able to be fans."

Maddox said Princeton would have two teams this season with a goal to building more and their ambitious plans should be clearer after their token sale in the coming months.

But, ultimately, Princeton know the priority remains getting the Ws on the court as a new FIBA 3x3 World Tour season approaches. "None of this works if we don't win," Maddox said.

After a couple of Covid-19 pandemic interrupted seasons, where travelling internationally proved difficult, Princeton are hoping to rediscover their form from 2019, where they were a power and impressive results included a runner-up finish at the World Tour Final in Utsunomiya.

"It's been a really weird couple of years," Maddox said with Princeton finishing 11th on last year's World Tour standings. "We had forgotten our identity. We stifled teams in 2019. We were hellish on defence. We want to recapture our identity."

Enthused by things off-court, Princeton will be journeying back to their favored hunting ground of Utsunomiya in good spirits. Before then, they will be engaged in a competitive training camp in Chicago where the squad for the season opener will be determined.

"We will approach every tournament, like it's the last one we will play," Maddox said. "We want to set the tone in Utsunomiya."