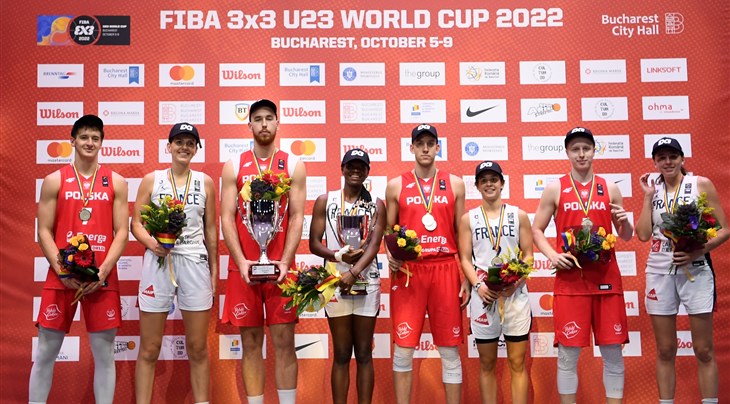 The men's final was an absolute game-of-the-year candidate. Down 20-15 against Serbia, Poland finished on a 6-0 run, punctuated by a cold-blooded two-pointer, courtesy of MVP Mateusz Szlachetka.

The 6ft 5in. (1.97m) sharpshooter had a team-high 8 points in the final and finished second overall in scoring in the men's category (53 points in 7 games). He was joined on the Team of the Tournament by men's top scorer Lorenzo Thirouard-Samson, who guided France to a bronze-medal finish in Romania, and Serbia's leading scorer Nikola Kovacevic.

Just three weeks after winning the FIBA 3x3 Nations League, France's women completed the double in the U23 category after beating USA in a nail-biting final (21-18). The 5ft 10in, (1.79m) dragster Anna Ngo Ndjock was unstoppable in that game. She scored 14 points, including 4 two-pointers and a tough drive and lefty lay-up for the win.

The French rising star starred on the Team of the Tournament, alongside tournament top scorer, US prodigy Lexie Hull (who had 63 points in 7 games), and Julia Jorritsma, who led the Netherlands to bronze in another nail-biter, against China (21-18).