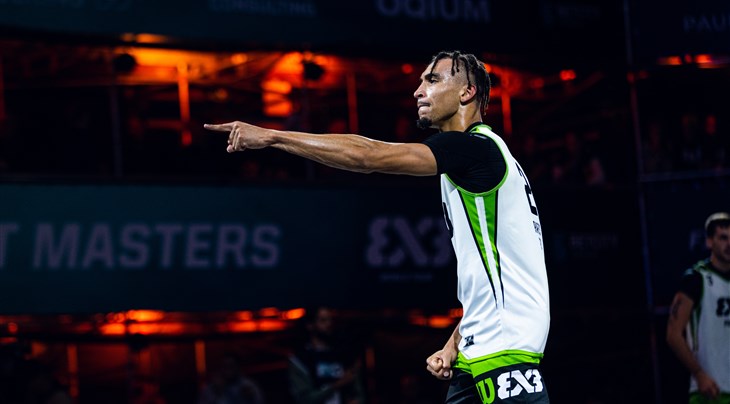 PARIS (France) - Anticipation is building for the FIBA 3x3 World Tour's first-ever visit to France as pumped-up 3x3 stars get ready to dazzle at the historic Paris Masters 2022 on October 7-8.

Let's look at some of the best in Paris.

For the first four Masters of the season, there was no doubt that a new king sat on the 3x3 throne. A trio of MVPs and leading unbeatable Ub (SRB) meant Strahinja Stojacic wasn't actually 'Doctor Strange'- he had become 'Doctor Success'.

But after Ub's winning run ended to Antwerp (BEL) in Debrecen, they've been absent on the World Tour meaning Stojacic has had to watch rivals Thibaut Vervoort and Karlis Lasmanis make their move.

The 30-year-old gets his chance in Paris to issue a reminder that he's No.1 for good reason and along the way he might even cross paths with his big brother Stefan Stojacic - one of the best to ever do it in 3x3.

You just know Strahinja Stojacic's return on the World Tour will be special.

This all-time sniper couldn't miss in Utrecht in an MVP performance, where he led Liman (SRB) to a breakthrough title on the World Tour 2022.

This deadly 30-year-old was back to his brilliant best and stuffed the stats with an insane performance in the final against Paris ,where he finished with a triple-five.

Kojic is in his groove and if he continues to fire then Liman might just go back-to-back on the World Tour.

New stars have emerged from the red, white and blue this season but big fella Kareem Maddox remains the USA's No.1 ranked player.

The 6ft. 8in (2.04m) athletic beast has lost none of his spring to be an absolute force at the rim. And he's been playing with extra fire in 2022 in a determined bid to end Princeton's three-year World Tour drought.

France's new sensation is set to light up Paris and he looms as the most hyped up player of the ninth Masters of the season.

He's only 24 and new to the pro circuit but Djoko played like a vet in his dazzling World Tour debut in Utrecht, where he was the ultimate show-stopper.

Djoko is a human highlight reel who can dunk, throw dimes and hit crazy shots almost every other possession. In front of a loud home crowd, he is sure to be the ultimate fan favorite especially when Djoko makes the half-court his personal playground.

There are new kids on the block doing their thing, but Dominique Jones aka 'Disco Domo' continues to be the ultimate entertainer. His dancing shoes were made for the half-court and he's out to be a crowd pleaser in Paris, where he will thrill a legion of new fans.

'Disco Domo' continues to fool opponents as he showed so memorably at the recent Penang Challenger, where he destroyed Saitama ALPHAS with an insane 17-point scoring binge, a rare feat in the first-to-21 game.

When 'Disco Domo' is feeling it, not even a lit up Eiffel Tower makes for a prettier sight.

The wait was certainly worth it seeing this flying Dutchman take over in Utrecht. Worthy de Jong is all in on 3x3 and his World Tour debut underlined why he's so perfectly suited to the 10-minute sprint.

He's lean and mean and unafraid if there is a taller defender in his way to the rim. The Utrecht star is out to embarrass opponents and you know he will because this dude is simply unguardable.

No matter what happens from here, Bogdan Dragovic's legacy is secure. After all, this Serb sharpshooter hit arguably the most clutch shot of all time when he downed mighty Novi Sad to lift underdog Zemun to glory at FIBA 3x3 World Tour Bloomage Beijing Final 2017.

The 6ft. 5in (1.95m) sniper still breathes fire like he's a character in House of the Dragon and is capable of heating up quicker than instant noodles.