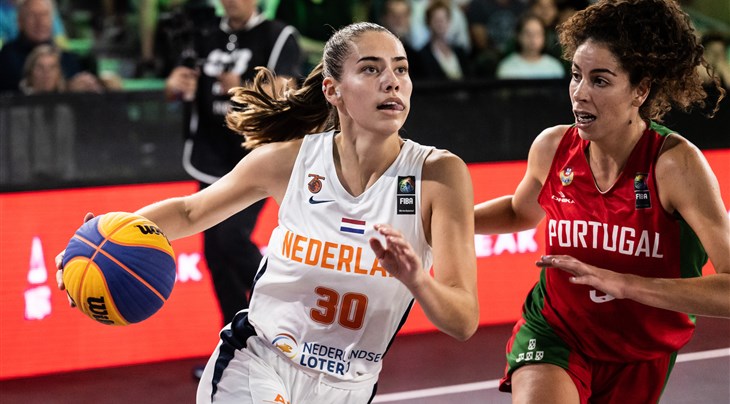 And we've listed the cream of the crop in both the men's and women's sections.

This 23-year-old athletic beast is spicier on the half-court than habaneros as he proved during the FIBA 3x3 Nations League 2022 Americas Conference.

If the 6ft 6in (2m) Thiebaut gets a full head of steam then underdog Chile might land a few blows in Bucharest.

You better not blink because this 23-year-old can put defenders on posters with his insane vertical and he's another dude who tore up the 3x3 Nations League 2022 for a talented France team.

You better believe Les Bleus is a serious contender in Bucharest with Pottier steering the wheel. The insanely talented 21-year-old is already Germany's No.4 ranked player and the emerging star made a big impression on the 3x3 pro circuit with rising Dusseldorf LFDY (GER).

Fertig is a walking bucket and if gets his radar on target then he's in for a major showing on the big stage in Bucharest.

He's lit up the Nations League 2022, now 20-year-old Shoham Gat will try to go up another level in the 3x3 mecca of Bucharest.

Gat has more handles than a Twitter burner and that spells major trouble for defenders. The 22-year-old is moving up the ranks of Mongolia's professional players having been a regular for pro circuit team Zaisan MMC Energy (MGL).

3x3 crazy Mongolia have put a lot into the 21-point game and their young guns like Chuluunbaatar are out to show the world that it's been a worthy investment. The 23-year-old flying Dutchman has had a big year, where he was a constant force for the Netherlands in the Nations League 2022 and his rise has been underlined by making his World Tour debut recently in Utrecht.

Don't take your eyes off the speedy 6ft. 2in (1.89m) who can do something crazy faster than you can blink.

Mighty USA always have a wealth of talent to choose from and that's no exception in Bucharest. The best might be WNBA player Emily Engstler who is right at home on the half-court having already played on the FIBA 3x3 Women's Series 2022.

She's cold blooded, loves to throw a crazy dime and can play lockdown D when needed. Emily Engstler must have been born in a 3x3 lab because the 22-year-old can do it all.

The loud local fans will be hoping their heroes can go on a giant-killing run and their prayers might be answered through 23-year-old sensation Teodora Manea, who might just be her proud country's next big thing in 3x3.

The 23-year-old is all power with the towering 6ft (1.82m) player unstoppable when she attacks the rim and she's an elite defender too.

She might just be 23 years old but Onolbaatar already carries the hopes of her 3x3 obsessed nation on her back.

The 5ft. 11in (1.8m) Olympian is a certified bucket getter and if she gets going then Onolbaatar will have cemented her already impressive legacy even further. Success follows this Chinese new sensation who expects silverware having won bronze at the Tokyo Olympics and gold at FIBA 3x3 Asia Cup 2022.

Mentored by China's best ZhiTang Zhang and Lili Wang, this 20-year-old already has a mature game and the 6ft (1.83m) Ji can make older players look like they belong in kindergarten. She's a lean, mean 5ft. 10in (1.79m) US college basketball player who makes putting it in the basket look oh so easy. The 22-year-old might just be Japan's best young talent who is fresh off leading her country's strong charge at Asia Cup 2022.

Konno is stamping herself as one of the best 3x3 players in Asia but now wants to make her mark on the world stage.

The towering 21-year-old dominated for an almost invincible France during the Nations League 2022 and the 6ft. 5in (1.96m) Macquet is aiming to reach new heights in Bucharest.

It's almost unfair how skillful she is leading to opponents feeling almost helpless when matched up with this unstoppable force on the half-court.