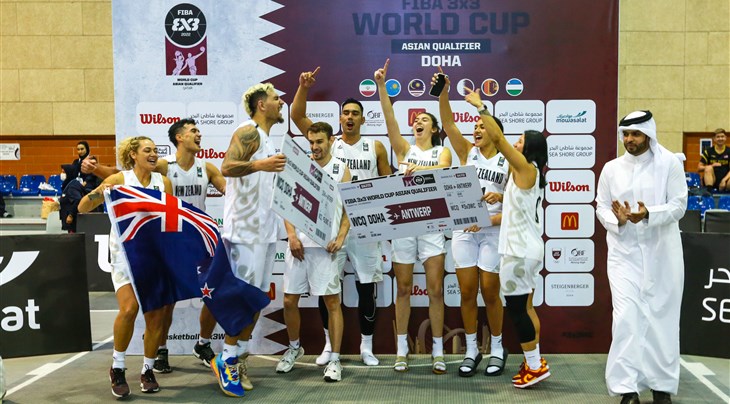 In the men's category, New Zealand defeated Iran in an absolutely thrilling final (21-20). After both teams had a chance to win the game, it was the FIBA 3x3 U18 World Cup 2015 MVP Tai Wynyard who drove to the basket for the game-winner, which sent the 3x3 Tall Blacks to Belgium. This marks New Zealand's comeback to the FIBA 3x3 World Cup with the men's team after missing the last edition in Amsterdam in 2019.

The speedy 24-year-old Nikau McCullough led all scorers in the men's category with 37 points. He had 11 in the final only, including a clutch two to tie the game at 20.

New Zealand also went undefeated in the women's competition but gave their fans a little more breathing room, with a 19-12 triumph in the final against Uzbekistan. The 23-year-old Tiarna Clarke shot the lights out for the 3x3 Tall Ferns in Doha. She led all players in scoring with 30 points, with a game-high 10 in the final.

The seventh edition of the FIBA 3x3 World Cup will take place in Antwerp, Belgium on June 21-26.