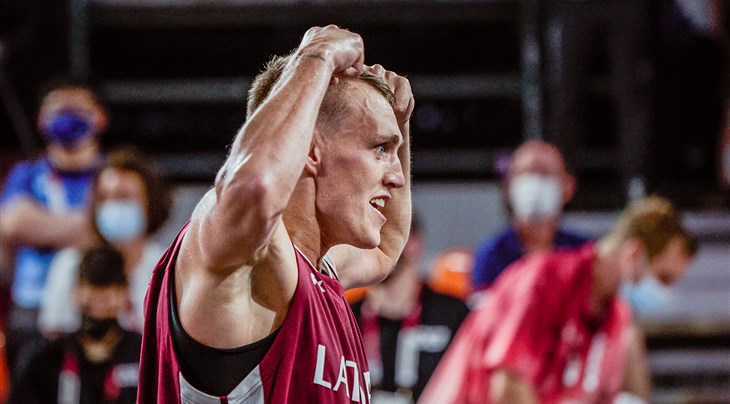 ANTWERP (Belgium) - Just two months away, the exact pathway for glory at 3x3's showpiece event has been revealed as the buildup continues for the Crelan FIBA 3x3 World Cup 2022.

With anticipation rivalling Kendrick Lamar's new album drop, FIBA unveiled the schedule for this year's biggest event which will be played in Antwerp from June 21-26.

There are 40 teams - 20 in each gender - heading to Belgium with World Cup glory in their sights but firstly they have to get through an absolutely loaded pool stage.

There is even more on the line at the World Cup with the winner of each pool to qualify directly to the quarter-finals adding more spice to the contests.

🤩All games from the #3x3WC in the same graphic

To get you hyped, here are the most exciting games of the pool stage

What a blockbuster this will be! You want passion, skill and excitement? Then make sure you watch this battle between the Asian powerhouses, who always bring it when facing each other.

Defending 3x3 World Cup champs China will want to make a statement early and continue their winning form over Japan after winning a thriller 15-12 at the Tokyo Olympics en route to a surprise bronze medal.

That was revenge for China after they lost a close semi-final at home during the Chengdu stop at the Women's Series 2019.

With a devastating one-two punch of speedy Mai Yamamoto and walking bucket getter Stephanie Mawuli at the core of the Rising Sun, Japan feel like they are on the cusp of being absolutely elite.

This is an evenly matched battle that is sure to go down to the wire.

Both teams loom as dark horses in the tournament and could make a giant killing run with Pool C looking wide open.

Belgium, of course, will have the help of their crazy loud fans in the bleachers but they will have to contend with Africa's best in an early litmus test.

Unfortunately, Egypt haven't played much since the pandemic, but do you need reminding of the ridiculous skills of Soraya Mohamed? In case you forgot she can make the Wilson freestyle like she did so memorably at FIBA 3x3 Africa Cup 2019.

Upset alert? We know, the Polish fans won't be happy. And they probably have every right to feel disrespected because they feel overshadowed as the No.3 seed.

Poland were remarkably consistent during last year's Women's Series with a runner-up in Mies and two final four finishes. And they have a slew of stars, including No.6 ranked Klaudia Sosnowska.

But you feel Belgium can legit push them and that this might just be a sneaky early round classic. Is this a final preview? Calm down, let's not jump to conclusions but these are two of the best to do it and legit gold medal contenders.

France have a point to prove after shockingly missing out on the podium in Tokyo and also losing in the semis at home at the FIBA 3x3 Euro Cup 2021. They've got the talent to fuel their own 'Redeem Team'.

You know the names and Migna Toure, Laetitia Guapo and Marie-Eve Paget sure haven't missed a beat. But they will need to be at their best to overcome the hoops superpower.

USA beat France in the FIBA 3x3 Olympic Qualifier Tournament and in Tokyo, but it is unknown what their line-up will be.

No matter who is on the floor for them, USA usually collects trophies like Taylor Swift at the Grammy Awards. But USA didn't qualify for FIBA 3x3 World Cup 2019 and will be desperate for their third World Cup title.

It's going to be on like Donkey Kong in a game that - yes, let's admit - might be a preview of the gold medal.

The contest between the No.4 and No.5 seeds should go down to the wire although Spain deserve to start as favorites after an incredible 2021.

After so much heartbreak in recent years, culminating in missing out on the Olympics, Spain proved they are 3x3 wonder women by winning the Europe Cup in emotional scenes.

Led by inspirational Sandra Ygueravide, Spain have four of the top nine ranked women players in the world and beat the Netherlands 21-14 at the Europe Cup and a 20-18 thriller in Mies.

The Netherlands, however, won't be overawed and have the brilliant Bettonvil sisters while 22-year-old Noortje Driessen is a rising star. Keep a close eye on her!

Both these teams have good reason to believe they can go very far in Antwerp.

Oh Canada! Can you believe Canada have never medalled at the World Cup? Well they are out to create history in Antwerp as Canada eye a strong start in what shapes as a tough Pool D.

Canada will have fond memories of the last time the teams met when they delivered a 21-9 beat down in the Bucharest Final. The incredible Plouffe sisters were unstoppable and combined for 13 points and the Dutch will have hopefully learned how to counter their dominance inside.

That was revenge for Canada who lost a 16-15 semi-final thriller to the Netherlands in Constanta in what was one of the best games on the pro circuit last season.

Except something similar in Antwerp. Pool D really is wild! In such a tough group, with teams chasing finishing on top to qualify directly into the quarters, every game counts and this clash looms as vitally important between two heavyweights.

As they rode a wave of confidence late last year, Spain defeated Canada twice at the Montreal spot in the Women's Series, including 17-13 in the semis. The disciplined Spaniards were able to lock down Canada but can they do it again?

Whoever comes out on top here will be in good shape to progress to the quarters. At the first-ever FIBA 3x3 AmeriCup 2021, Brazil showed they were the real deal with a silver medal effort. But they came up short 21-9 against mighty USA in a one-sided final.

But they've surely learned from that and won't feel intimidated when the teams clash in Antwerp. To have a shot against USA, you need firepower and Brazil have exactly that led by spectacular Sassa Fausto Goncalves.

If they can hang in early and don't get blown away like in Miami, Brazil might just be able to pull off an upset for the ages.

The four-time World Cup champs had a mixed 2021. There were signs that 3x3's GOAT team were not as dominant as before after finishing with the bronze in Tokyo but they made their critics look foolish when Serbia won the Europe Cup.

Along the way in Paris, Serbia silenced the home fans with a tight 20-17 win over France in the quarters.

But don't dismiss Les Bleus. France can sometimes be overlooked among the top contenders but they always bring it in national competitions and memorably finished with bronze at FIBA 3x3 World Cup 2017.

They will be severely tested against Serbia, who will be formidable no matter who suits up for them in Antwerp. But the No.1 seed might well get all they can handle against France, who know how to bring their A-Game on the big stage.

Two of the best from the Americas do battle and you just know this will be lit. Both teams were brilliant during the AmeriCup with Brazil winning silver while Puerto Rico only fractionally missed out on a podium finish.

Puerto Rico became the darlings of 3x3 during their incredible comeback season in 2021, where Angel Matias proved he was a real life miracle worker.

But he'll need his wings attached in Antwerp as Puerto Rico have a mighty challenge against Brazil led by big fella Andre Ferros who is stronger than Caipirinha.

This will be epic! Can they go a step further and upset the national super power at Serbia's pet event? Don't put it past them because Puerto Rico don't fear anyone and can pack a punch like J-Lo in Out of Sight.

Even though they enter as top dogs, Serbia are no guarantee to directly qualify for the quarters but a victory here might just erase any doubt. This match up has more stars than sitting in the front row of MSG. Players from these European powers play each other regularly on the World Tour, but they give just a little something extra during national competitions.

Latvia prevailed in the Olympic Qualifying Tournament 21-17 and then again in Tokyo 22-18. In Graz, Karlis Lasmanis -maybe the best 3x3 player in the world - had a battle royale with Dimeo van der Horst, who on the right day can be the best player on the court.

If 'Dimes' can outplay 'Batman' then the Netherlands might be able to take down the Olympic gold medalists.

After receiving pro status, the Poles loom as a dark horse title contender as they eye shocking the world in Antwerp. You sense this will might well replicate their Olympic epic when the Dutch Masters got over the line 22-20 against Poland, who struggled in Tokyo.

But the Poles knocked out the Dutch in the quarter finals en route to winning bronze at the Europe Cup to kick-start a new dawn. Przemyslaw Zamojski was too hot to handle with 12 points and the Netherlands desperately need to figure out how to stop 3x3's latest superstar getting to his spots.

Poland arrive in Antwerp with a lot of self confidence, which will be put to the test against two-time World Cup runner-up Netherlands. There's good reason why Pool C is the 'Group of Death'. The insane games just keep coming. And this is no exception for these Euro powers who share recent history against each other.

Poland shocked Latvia with an upset victory in Graz but the Latvians rebounded with a comfortable victory at the Olympics. If Poland really are the real deal then they have to show it against Latvia, who quite rightly believe they are 3x3's standard setter.

What might make this an all-time classic? Karlis Lasmanis and Przemyslaw Zamojski going toe-to-toe like gladiators in the ring. Bring it on!

Almost 12 months ago, mighty USA were stunned by Belgium in Graz as Thibaut Vervoort put on a show with 10 points to prove to the world he deserved a NetFlix show.

USA were soon embarrassingly bounced out and missed an Olympic spot, but you just know that's going to make them stronger. They went all out in attack mode to win the AmeriCup and remain confident of defending their World Cup title.

But Belgium will have their rowdy fans giving them a boost and this smells like another upset alert although OGs will know a W by the hosts won't be that surprising .

After all, Belgium has done it before.

Much like the women's, the Asian powers in the men's are set to cook up a storm. There appears to be a lot on the line here in the incredibly loaded Pool C with victories worth their weight in gold.

This seems like it is absolutely must win for both teams if they want to progress to the knockout stages. Japan deserve favoritism after a nice win at the Olympics, where Keisei Tominaga unloaded his Tommy gun with a barrage of buckets.

And, of course, there are bragging rights on the line too for these great rivals.