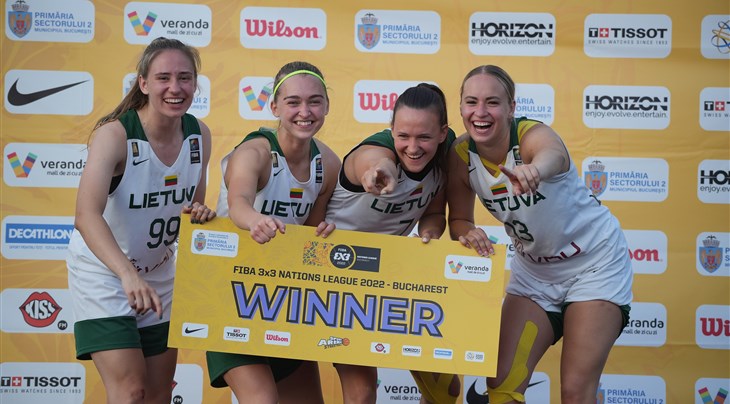 BUCHAREST (Romania) - Czech Republic (men's) and Lithuania (women's) capped dominant FIBA 3x3 Nations League 2022 U21 Europe East Conference campaigns during the last trio of stops on July 15-17 in Bucharest and qualified to the Nations League Final, which will take place in Constanta, Romania on September 14-16.

In the men's, Czech Republic continued their momentum after claiming two of three stops in Kaunas last month. Similarly, the team won two of three in Bucharest with their only blemish being a tough 18-16 loss to Lithuania in the last game of the competition.

Czech Republic easily finished top of the standings and well clear of second-placed Lithuania, who were the only other team to enjoy success with victories in Stop 2 and 6.

Their big fella Martin Svoboda was named MVP after a dominant campaign, where he led all scorers with 120 points in 17 games. The 20-year-old looms as an emerging star in 3x3. In the women's, Lithuania mirrored their performance in Kaunas by winning two of three stops.

Czech Republic proved their biggest challenger, particularly in Bucharest, with Poland falling away after starting so brightly with victory in Stop 1. The Nations League makes a quick return on July 26-28 with Stops 4-6 of the U23 Europe East in Kaunas.