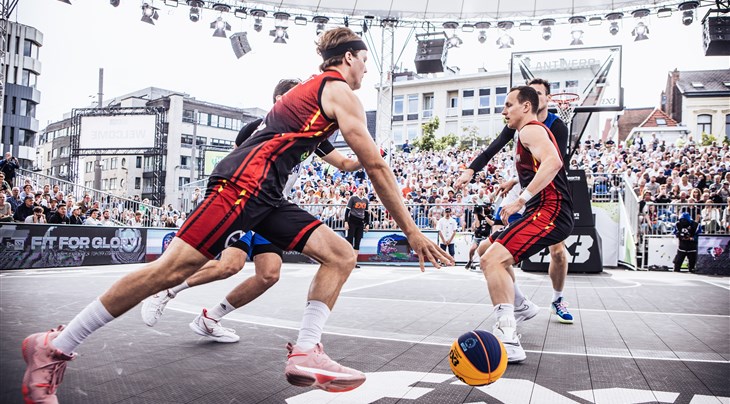 Lithuania's women were all gas no brakes to start their Crelan FIBA 3x3 World Cup 2022 campaign. Led by Kamile Nacickaite, who scored 18 points, they defeated the reigning Women's Series champs Germany in overtime (18-16) and also got a W over the Japanese Olympians (21-14) in their first game of the day.

Hosts Belgium's men put the crowd on its feet with two wins on Day 1. The number 6 player in the world Thibaut Vervoort scored no less than 13 points over Slovenia and added 5 more against Egypt.

European champs Spain's women, Canada's women (who had the fastest game of the day in their 22-5 defeat of Israel) and 4-time World champs Serbia's men also finished Day 1 undefeated.

Don't skip channel because he's Must-See TV, crowd favorite Thibaut Vervoort welcomed everyone to the best party in Antwerp with a tournament-high 18 points on Day 1.

📺 Must See TV bringing the Crelan #3x3WC down and we're only in Day 1 🔥🔥🔥 pic.twitter.com/AaCbE4Ju4f

She's colder than Lithuanian winter! Kamile Nacickaite had ice in her veins on opening day. A cold-blooded 2 for the win against Germany and 18 points to lead the scoring charts, together with Spain women's star Aitana Cuevas (and Belgium's Vervoort)

Colder than a Lithuanian Tuesday in January @SpecialK23_ #3x3WC 🥶 pic.twitter.com/krY4UrPUu4

Women's Pools B and C and men's pools B and C take the court tomorrow in Antwerp, including Tokyo 2020 Olympic gold medalists Latvia's men and USA's women.

The action runs from June 21-26, and you can follow it live on TV and on social on the FIBA 3x3 YouTube, Facebook, Sina Weibo and Douyin pages, not to forget the FIBA account on Twitch. For more information, we have a 'Where to watch' article for you.