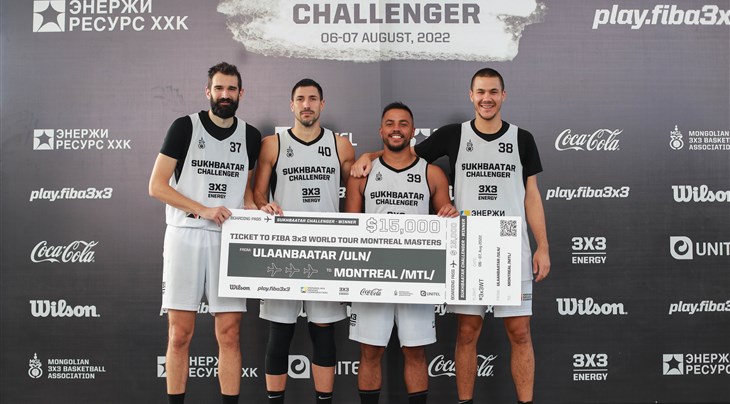 After bouncing back from a quarter-final exit at the Prague Masters, Liman's fourth straight Challenger title means they will have another chance at glory on the World Tour after booking a ticket to next month's Montreal Masters.

They were: No.1 points scored and best shooting value.

Powerhouse Liman Huishan NE are completely owning Challengers after claiming their fourth straight title to now rack up 20 straight wins in these events.

Unfortunately, they haven't quite repeated that success in Masters this season having twice been knocked out in the quarters and a runners-up finish at the Manila Masters.

But you just knew after the disappointment of Prague that a full-strength Liman Huishan NE would be out for revenge and they didn't disappoint although they survived a first up scare against Saitama (JPN) before winning in OT.

The spectacular Serbs enjoyed the return of sniper Stefan Kojic, who was on target throughout to finish equal second in points as Liman found their irresistible best level.

It was a typically even performance from one of the best ever 3x3 teams with all four of their players scoring at least 20 points in the event. After struggling in Prague, big fella Aleksandar Ratkov made the paint his personal playground connecting on 76% of one-pointers.

He was second in player value (28.4) to deservedly walk away with the MVP and again underline the bucket load of pride within Liman, who always raise their intensity following stinging defeats.

As their trademark, Liman Huishan NE saved their best for the knockout stages highlighted by a huge 21-11 win over Sansar MMC Energy (MGL) to silence the home fans before somewhat limiting their former player Stefan Stojacic and overcoming hot Vienna in a tense final.

Liman will be hoping to take their unbeatable Challenger form into the Lausanne Masters on August 19-20.

With more hype than DC League of Super-Pets, Vienna didn't disappoint on the back of their first ever pro circuit title at the ABA Edmonton Challenger.

The Austrians are proving to be the real deal and rising quickly on the congested 3x3 ladder. They lived up to the hype with an unbeaten run en route to the final, including convincing victories over Danube (SRB) and Ulaanbaatar MMC Energy (MGL) on Day 2.

Liman Huishan NE proved their kyrptonite but Vienna are cooking and they're smelling tastier than a Wiener schnitzel. The front man has been Liman's great Stefan Stojacic, who is reminding everyone that he is one of the best to ever do it.

'Mr Robot' has again been rewiring opponents and he's somehow lost none of his athleticism from a serious knee injury that appeared to end his playing career. Stojacic was a bad man in Sukhbaatar and led nearly every category, including player values (41.5)

Lethal Linortner: Stojacic was not a one-man band and clearly lifted his teammates to new heights, including Matthias Linortner who hit an incredible 91% from inside the arc and was also deadly from downtown.

Linortner's explosion gave the Austrians a three-headed monster alongside Stojacic and Filip Kramer who was a little subdued but still threw down some thunderous jams.

You feel this is the start of a memorable run for Vienna. Everyone was hyped to see comeback king Stefan Stojacic against his old team Liman with the title up for grabs. And he was feeling it from the get go with a tough layup after a killer crossover then a splash from deep.

With more action than Bullet Train, Stefan Kojic went bang, bang then Filip Kramer resisted the open slam for the more modest layup to underline the seriousness of the situation in front of a full house.

Given more space, Kramer didn't want to play nice anymore as he slammed it down but Kojic's hot hand continued with another two-piece and he was matched by Nebojsa Kilijan as the Serbs skipped away.

When MVP Aleksandar Ratkov went to work inside the paint, it was a wrap with Liman gaining the bragging rights over Stojacic and claiming more silverware as they eye an even bigger prize in Lausanne.

The reward: Two tickets to the Montreal Masters

With Vienna having already qualified, Liman Huishan NE and third-placed Ulaanbaatar MMC Energy (MGL) earned their tickets to the Montreal Masters on September 3-4, 2022.

Key Stats:
- Only two of the top four seeds made the semis with No.2 seed Antwerp falling to Ulaanbaatar MMC Energy in a quarter-final thriller, while No.4 seed Jeddah's (KSA) struggles continued after losing both their games.
-Liman's 21-11 beat down of Sansar MMC Energy (MGL) in the semis was the fastest game of the tournament lasting just 7'10'' of playing time.
- Bogdan Dragovic breathed fire in perhaps the best solo performance of the event with a triple-five (10 pts, 5 reb, 5 hgl) and the buzzer beater to lead Danube (SRB) past Saitama (JPN) in pool play.