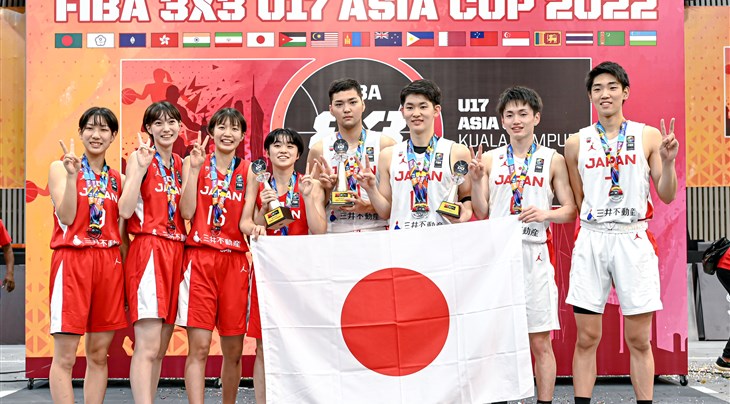 KUALA LUMPUR (Malaysia) - Japan dominated with double delight as their men's and women's teams won the sixth edition of the FIBA 3x3 U17 Asia Cup, which took place inside the MABA Stadium in Kuala Lumpur, Malaysia on October 13-16, 2022. It marked the first time ever a country wins both categories in the same edition of this competition.

In the men's category, Japan repeated as champions - previously played at the U18 level - as the event returned after a three-year break. Unbeaten Japan cruised through to the final, but faced a tougher test against India in a thrilling final. It was bucket for bucket before Japan scored the final five points to prevail 21-17.

Young gun Eijiro Ogawa was named MVP after scoring 42 points across five games and he was joined in the team of the tournament by Harsh Dagar (India) and Temuulen Tumur, who led Mongolia to the bronze medal after a tense 21-18 win over Chinese Taipei.

On the women's side, Japan won their first U17 Asia Cup title since 2016 after silencing the home fans with a comfortable 21-7 win over Malaysia. Prodigiously talented 16-year-old Kanon Suzuki cemented her MVP with a game-high 8 points to lead Japan, who had survived a major scare in the semis against Chinese Taipei.

Suzuki, who scored 31 points in five games, was also named in the team of the tournament alongside Hui Lin (Malaysia) and Yu Lan Chang, who powered Chinese Taipei to the bronze medal with a 21-17 win over Mongolia in a reverse of the men's result.