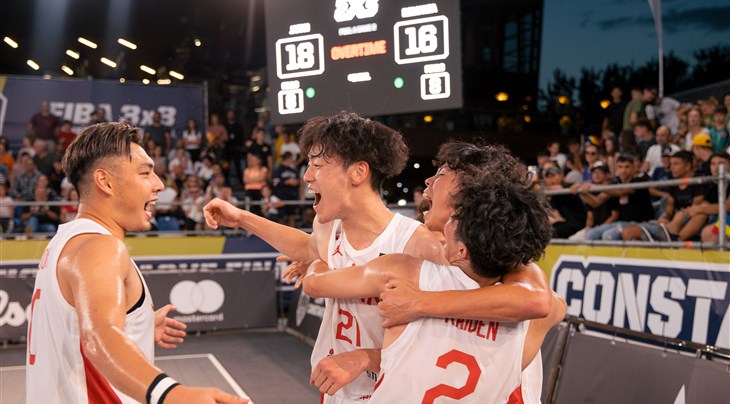 In the first day of action, pools B and D dueled out in both categories. The first chapter was between Japan (U21) and Kenya, with the younger team coming out on top. Later that day, Lithuania (U21) defeated Kenya, and there we had the first teams that qualified for the quarterfinals, both coming from the U21 conference. Pool B in the women's competition started with drama, as France (U21) got the win against USA in overtime. Both teams scored one point in OT, and then Lisa Dufon secured a rebound after her own miss and scored the last point of the game, getting her team closer to the quarterfinals. Then, in the last game of the day against the hosts, France defeated Romania to finish the pool as the number one team. As United States also won against the hosts, they qualified as the second seed of this pool into the knock-out stage.

Having pools of three teams can create the chance that each of them gets a W, which means the teams that have the most points will move on. This is exactly what happened in pool B in the men's competition, where Spain started strong, ending the game against Lithuania (U21) with a thunderous dunk, but eventually lost the game against Israel. Lastly, in the final game of this crazy pool, Lithuania (U21) won against Israel in the same way Spain defeated them, with a final powerful jam. Thanks to scoring more points, Israel qualified as the number one team out of this pool, followed by Lithuania (U21). In pool D, things didn’t involve the use of mathematics, as both France (U21) and Czech Republic (U21) defeated Rwanda and booked their spots for the final day. In the last game of the pool between the two European teams, France was the one who finished undefeated, after a close affair that ended 19 to 16 in their favor.

After the first day, all six U21 teams moved on into the knock-out stage. Moreover, the youngest scored the most points. In the men's competition, 7 out of the first 8 top scorers come from the U21 teams, with Kevin Tyml from Cezch Republic leading the way with 23 points. While in the women pools, 5 out of the first 7 top scorers are coming from the U21 squads. There, Yua Emura from Japan scored the most points in two games, 14.

The second day had 3 overtimes, and more ups and downs than a Disney Park roller coaster. It started with the women's pools, where France, one of the big favorites, defeated Egypt . Then, the big wall of China destroyed Hungary in the most one-sided game of the day, winning 20 to 6. Egypt was the first women's team sent home on day two, after Italy defeated them. France qualified as the number one team from pool A after scoring 21 points against Italy. In pool C, Hungary bounced back with a huge upset win against Lithuania. A bit of tension in this pool, where we had to wait until the last game to find out the teams that would advance. China went undefeated after a close win against Lithuania that got sent packing after failing to win a single game.

The first game of the men's competition finished in overtime, with Egypt overdueling Lithuania. Immediately after, Mongolia (U21) and Japan scored 41 points with the latter coming out on top. Couldn’t be more epic than that, right? Of course it can because we are talking 3x3 here.

The next two games in the men's pool ended in overtime. Israel had a crazy comeback down by 4, with Omer Harel who hit two two-pointers, one to send the game to OT, and the other to win the game. Then it got electric because the hosts stepped on the court for the first time in the men's competition, against Japan. After a back-and-forth affair, Japan pulled up from outside to end the game in OT and guarantee their spot in the knock-out stage.

🇯🇵 Japan survive another thiller against host Romania to advace to the #3x3NL quarter-finals! pic.twitter.com/Ag7STvXN3s

It was a win-or-go-home situation for Lithuania, facing Israel for the last game of pool C. Israel scored 21 again and advanced undefeated in the quarters, with Egypt as the second seed. A really bad day for Lithuanians. Last game of the night featured the hosts in a leave-it-all-on-the-court situation with the quarter-finals on the line for both Romania and Mongolia (U21). Pushed by an amazing crowd, Romania led for the entirety of the game and finished the game before the final buzzer, 21 to 11. All 4 players from Israel scored at least 9 points.

On the women’s side, France and China seem to be a huge threat.