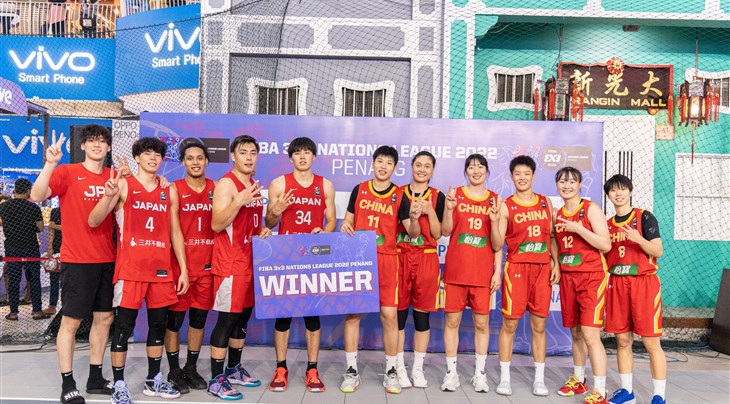 PENANG (Malaysia) - Japan (men's) and China (women's) enjoyed two triumphs during the last trio of stops at the FIBA 3x3 Nations League 2022 Asia Conference on July 25-31 in Penang to book tickets to the Nations League Final in Constanta, Romania, on September 14-16.

In the men's, it was a three-way battle between Japan, China and Mongolia, who topped the standings after winning the third stop. But Japan made their move in stop 4 starting with a thrilling 21-20 semi-final victory over China followed by a convincing 21-14 over Mongolia.

Mongolia's hopes of reaching the Constanta Final were dashed by a lowly fourth placed finish in stop 5 as China kept themselves alive with a commanding 21-16 win over Japan.

With Japan leading by just 20 points over China and only 30 clear of third-placed Mongolia, the stage was set for an incredible finale. But Japan held their nerve to crush China in the final 21-12 and seal a place to Constanta.

Sniper Ryo Sadohara was firing all week long to make Penang wet with the 22-year-old emerging as a rising star for Japan. He finished second overall in scoring in Penang, just behind Mongolian dragster Ulzii-Orshikh Myagmarsuren.

In the women's, like their counterparts, the Asian superpowers were locked in a battle for top spot but it was China who emerged over Japan by just 40 points.

The teams split the six stops but Japan's fourth-placed finish in stop 4 proved costly. Led by FIBA 3x3 Asia Cup 2022 gold medalist Kun Huang and the towering Mingling Chen (6ft. 4, 1.92m) - who won the scoring charts in Malaysia, China were better at the business end of the competition and took out stops 4 and 5 to essentially lock up a place to Constanta.

Japan, who boasted Asia Cup 2022 player Norika Konno, had a consolation victory over China in the final of stop 6 but it came too late.

The Nations League makes a quick return on August 2-4 in Szolnok, Hungary, in stops 4-6 of the Europe Central conference.