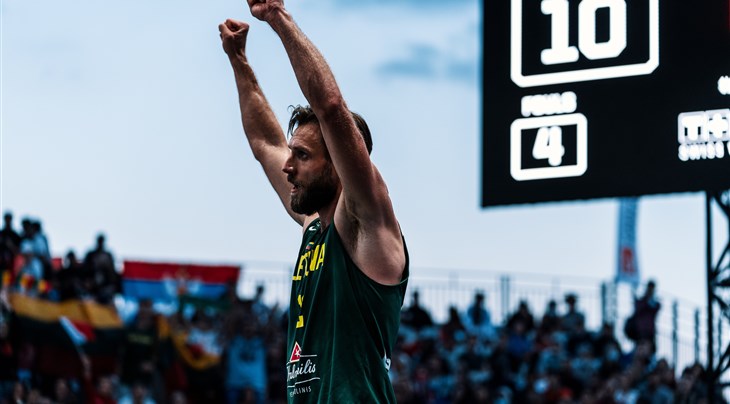 JEDDAH (Saudi Arabia) - Prized recruit Darius Tarvydas has predicted new-look Jeddah will play an aggressive style of offense, as the Saudi Arabian team loom as one of the most intriguing teams of the FIBA 3x3 World Tour 2022.

Jeddah became a rising force last season highlighted by winning their first Masters in Prague. But Jeddah's brains trust were not satisfied as they aim to become one of the best teams in the business.

They've had a makeover with the inclusions of ex-Sakiai Gulbele and Utena Uniclub star Darius Tarvydas and 3x3 legend Simon Finzgar aka 'The Sphinx', who for many years had defenders mummified while being the talisman of Piran.

The dynamic pair have joined up with Jeddah stars Nemanja Draskovic, who was the MVP in Prague, and Ovidijus Varanauskas. With so much talent and flair, it makes Jeddah a potential highlight reel machine but the players will have to get used to each other with the team yet to practice.

"It's really exciting to be part of a team with so much individual talent and we can all do our thing and score the ball," Tarvydas said. "But it's going to take time and we have to build chemistry. The training sessions ahead of the season will be important to work on what we want to do."

The 6ftin. 7in (2m) bucket getter led Sakiai last season in scoring at 5.6ppg underlined by deadly shooting from deep. But Tarvydas was trusted to have the ball in his hands a lot - a role he does not expect to have with Jeddah considering their wealth of ball handlers. The 30-year-old expected to revert back to his role with Utena Uniclub, who he helped become the breakout team in 2020. Tarvydas had less scoring responsibility back then - averaging 3.4ppg that season - but was a key weapon of their potent offense.

"I think we will play more like Utena when I played with them...aggressive and fast...because we have a lot of highly skilled players," Tarvydas said. "We had bigger players at Sakiai, so played slower, and I had the ball in my hands a lot. I'm preparing myself for a different role but I'm comfortable with that."

The lethal Lithuanian was particularly looking forward to partnering up again with compatriot Varanauskas reviving memories of them winning the Lausanne Masters 2015 title with Vilnius.

"We know each other from a young age and have had memorable moments together in our career," Tarvydas said. "We have chemistry having played together many times and it is really exciting to join up and be together in this new challenge."

There might be an unknown on how all their pieces fit together, but Jeddah is sure set to be an excitement machine in 2022.

"We will be entertaining, I'm sure about that, because we have so many skilled players," Tarvydas said. "I'm excited to see how it all works on the court and we will have high expectations."