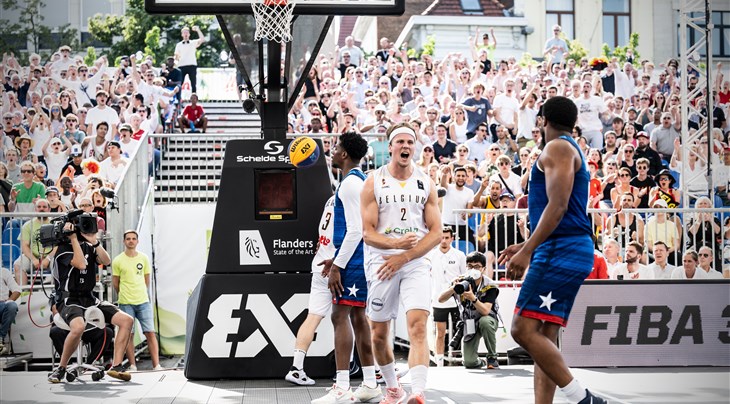 Down go the reigning champs! Hosts Belgium defeated USA in a thrilling game that was decided in overtime thanks to "Must See TV" Thibaut Vervoort converting two clutch free throws. The 24-year-old had a team-high 8 in the game and remains the top scorer in the men's category with 33 points in 4 games.

In front of a sold-out venue, the Belgian Lions also defeated Austria (21-18) in another thriller and booked their ticket straight to the quarter-finals, while USA and Austria will go to the play-in.
I Spain's women also survived a thriller against Americup 2021 bronze medalists Canada. Marta Canella acrobatically tied the game at the buzzer and Aitana Cuevas made clinched the game with two points in OT.

The reigning Europe Cup winners also advance to the quarter-finals while Canada and Netherlands will compete in the play-in.

James Parrot produces highlights on repeat. The US star doesn't do lay-ups and provided one of the highlights of the day in Groenplaats.

Ziomara Morrison made history for Chile today by earning her country's first-ever World Cup win, thanks to her 11 points against Israel (18-14). Still not convinced? She scored 13 points in Chile's defeat versus the Netherlands. Morrison leads the scoring charts with 39 points in 4 games.

WHERE CAN I WATCH?

The action runs from June 21-26, and you can follow it live on TV and on social on the FIBA 3x3 YouTube, Facebook, Sina Weibo and Douyin pages, not to forget the FIBA account on Twitch. For more information, we have a 'Where to watch' article for you.