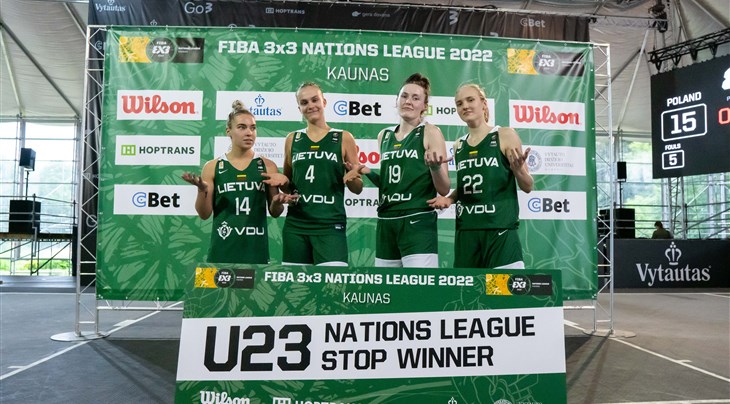 The three-day event provided plenty of cheer for the home fans in Kaunas with Lithuania women's winning all three stops to complete an unbeaten 8 of 8 record.

16-year-old basketball prodigy Juste Jocyte made a sensational 3x3 debut, leading all scorers during the tournament with 57 points in just 8 games.

They started with a bang in stop 1 although did receive a fright against Latvia 21-18, which proved the closest Lithuania were to a loss. They blitzed the next two stops, including a 21-5 rout of Estonia on the final day to prove Lithuania were the host with the most.

The lethal Lithuanians averaged 21ppg through their eight-game win streak to finish a staggering 70 points clear of second placed Latvia on the overall standings so far.

In the men's, Lithuania were almost as dominant before their perfect record was broken in stop 3 by Latvia, who had an upset 20-14 victory in an act of revenge after being thrashed 21-6 by the hosts in stop 1.

Lithuania, though, should be well pleased having dominated the opening two stops, including another victory over Latvia in stop 2 where they won 18-14.

Their top scorer was Justinas Ramanauskas, who scored 65 points in just 8 games After three stops, Lithuania sit pretty on top and lead by 40 points over Ukraine, who claimed stop 3 with a thrilling 21-20 win over Latvia.

That defeat proved costly for Latvia, who now sit 10 points behind Ukraine but they leave with momentum having steadily improved over the three days of competition.

The next three stops will be held in Kaunas on July 26-28.