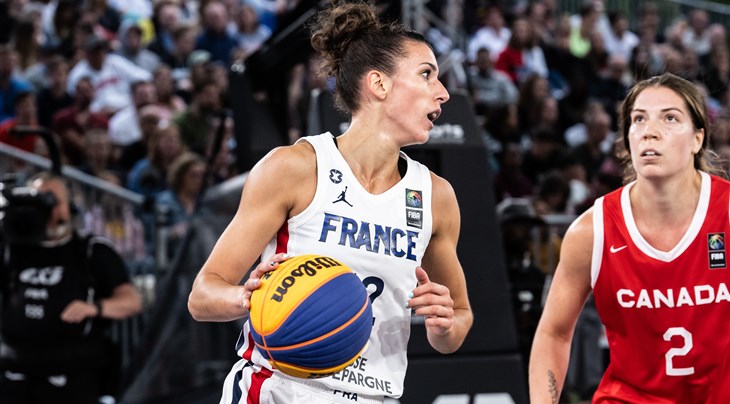 It will be their first meeting since the epic decider in Antwerp to highlight a loaded eight-team field as the Women's Series heads to North America for the first time this season.

World No.1 Germany are hoping the return of top-ranked player Sonja Greinacher can lift them out of a form slump. After a memorable 2021, Germany's momentum continued as the calendar flipped into a new year with back-to-back Ws at Tel Aviv and Poitiers.

But things have gone downhill for them since they lost in the play-in to the quarter-finals to Canada at the FIBA 3x3 World Cup 2022 and a Greinacher-less Germany then exited at the quarters of the Bordeaux stop.

With the 6ft. 3in (1.90m) Greinacher back and determined to once again dominate the paint, Germany can sense that winning feeling but they will be made to work in a tough field.

World champs France perhaps deserve outright favoritsm and headline Pool B as the No.2 seed. World Cup MVP Laetitia Guapo will want to continue her ridiculous comeback season, where she's won pretty much everything (she even became 3x3 French champion last weekend).

She is the only member of France's World Cup winning team, but 25-year-old Victoria Majekodunmi has been in hot form and looms as the country's next 3x3 superstar.

France will need their stars firing against No.3 seed Canada in a World Cup rematch. Canada will field their same World Cup team, but are hoping home court advantage can change the result on this occasion.

With the brilliant Plouffe sisters in the lineup, the Canadians should be confident of a deep run in their first action on the Women's Series this season.

Rounding out the list of favorites are USA, who boast World Cup player Lauren Cox while Breanna Richardson and Linnae Harper were part of red, white and blue's runner-up finish in Poitiers.

USA fell short to Germany on that occasion and the teams meet again in Pool A in Edmonton.

The Netherlands probably could have been in the top tier group, but appear the best of the rest. It hasn't quite been the talented Dutch team's year so far and they fell in the play-in to the quarter-finals at the World Cup to Lithuania.

But they still have an exciting mix of size and talent led by stars Loyce Bettonvil and Natalie van den Adel.

Edmonton welcomes the guest team Force 10 (USA), who will showcase the depth of talent in American women's 3x3.

The team will be led by Alexis Peterson, who was part of USA's triumph in Klaipeda last year alongside Richardson and Harper who will be rivals in Edmonton.

The always competitive Romania can't be discounted, especially with the 3x3 Olympian Ancuţa Stoenescu in the line-up, and nor can Japanese commercial team EXEWING who notched a couple of stops under their belts and believe they are building chemistry.