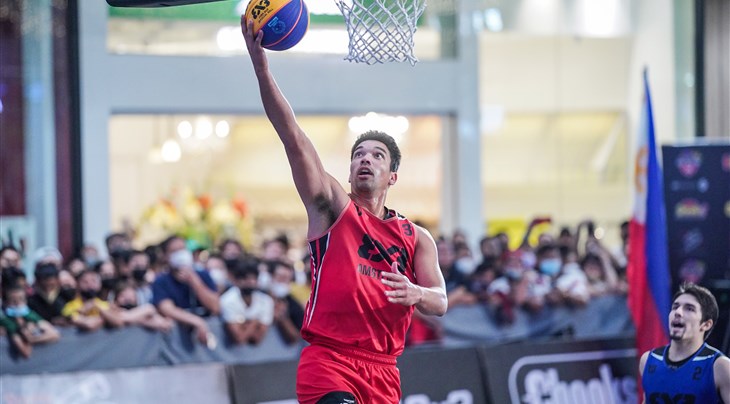 CEBU (Philippines) - Hot shooting from Arvin Slagter lit up a packed Shopping Mall Seaside at the Cebu Masters as a three-man Amsterdam HiPRO (NED) overcame the odds with an unbeaten Day One on October 1.

No.3 seed Amsterdam had a tough task without Julian Jaring who was a late arrival to Cebu and missed the opening day.

Playing without a sub presented obvious challenges but the Dutchmen weren't troubled first up in a comfortable 22-11 win over Saitama (JPN).

Jeddah (KSA) proved a tougher test with little separating the teams in a thriller in Cebu. It seemed like Amsterdam were starting to succumb to fatigue but Slagter's insane shooting proved enough in a perfect start for the Dutchmen looking for a first Masters title in 2022.

And they will be boosted by the presence of Jaring for Day 2.

Arvin Slagter was hotter than Cebu's weather with a brilliant 27-point scoring binge, including 16 points to lift Amsterdam past Jeddah. Every time his tiring team were being challenged, Slagter stepped up with a two-piece to electrify the loud fans. His final two sealed the deal and he celebrated in style.

The 6ft 5in (1.96m) sniper hit 11 twos in one of the best shooting performances seen on the World Tour and if Slagter is on fire again on Day 2 then Amsterdam might just go all the way. You knew hometown hero Mark Tallo was going to put on a show for the local fans and the No.1 ranked Philippines player did exactly that to leave the Shopping Mall Seaside rocking.

The 28-year-old pulled out all his famous tricks against No.1 seed Antwerp (BEL) to almost power Cebu Chooks to a major upset. Tallo, whose nickname is Spida, was deadlier than a tarantula when he unleashed a series of nasty moves, including the Euro step, several crossovers and a filthy no-look dime.

He recorded a triple-five but it wasn't enough to get past Antwerp as Cebu lost a tight contest before bowing out at the hands to Omaha 3BALL (USA).

There were emotional scenes after Manila Chooks missed out on qualifying for the main draw as the much respected Chico Lanete drew the curtain on his playing career. Lanete received a huge ovation from the loud crowd during a special ceremony where he received a framed jersey from Chooks-to-Go president Ronald Mascariñas.

He won't be lost to 3x3 though with Lanete becoming the full-time trainer for Manila and Cebu Chooks.