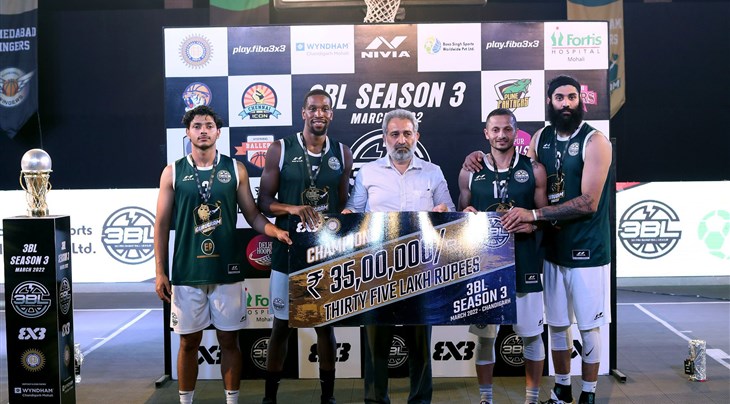 CHANDIGARH (India) - Defending champion Gurugram Masters went back-to-back in the third edition of the 3BL, India's only professional 3x3 league, to book a ticket to the FIBA 3x3 World Tour Manila Masters in May.

Strong favorite Gurugram went undefeated in the competition on March 20-21 and won all five games but were pushed by Ahmedabad Wingers in an epic final.

In the women's competition, Delhi Divas beat defending champions Kochi Stars in a match up between the title favorites.

Delhi pulled away after the teams traded buckets early to dethrone Kochi in a tight 17-14 victory thanks largely to the spectacular play of India national player Raspreet Sidhu who claimed MVP honors.

Defending champs Gurugram entered as heavy favorites and they boasted a dynamic one-two punch in Bikramjit Gill and Inderbir Gill.

Bikramjit Gill aka 'The Bearded King' has been a fan favorite in 3x3 for many years having starred on the World Tour and he's also a veteran at the international level with Canada as their No.1 ranked national player.

He was again at his unstoppable best with domination inside and outside, while a hot shooting Inderbir Gill aka 'The General' hit a number of big buckets to claim MVP.

The No.1 seed rolled through but were made to work in the final against Ahmedabad before ultimately proving why they are India's best 3x3 team and remain the standard bearer in the country.

Ahmedabad fancied their chances of going all the way and ending the dominance of Gurugram. Their confidence was justified with Ahmedabad boasting Indian national team’s star duo of captain Vishesh Bhriguvanshi, and 7ft (2.13m) Amritpal Singh.

The 8th seed proved they were one of the teams to beat to storm into the final undefeated, including a 21-5 beat down of Delhi Hoopers in the semi-final. They had their chances to knock off Gurugram in the final but fell short although proved they are a powerhouse of Indian 3x3.

This was a final more hyped than The Batman and delivered a top-notch performance much like Robert Pattinson.

There was intrigue over this match up, particularly the towering Amritpal Singh against powerful Bikramjit Gill, who had the better early by utilizing his athleticism and hitting twos to give the defending champs an early four-point lead.

Bhriguvanshi's hot shooting from deep kept the underdogs in the contest and this thriller fittingly went down to the wire. A jumper from the baseline from Inderbir Gill gave Gurugram an 18-15 lead then Marcus Hammonds added another bucket to stretch the margin out to four points and that appeared to be game.

Think again. A determined Bhriguvanshi scored three points in a row to reduce the margin to 19-18 with less than a minute left and the championship in the balance.

But winning time equals Inderbir Gill time as he hit the two-pointer from the left corner to get the shooter's roll. It triggered a memorable celebration for Inderbir as Gurugram remain India's top 3x3 team.

The reward: A ticket to the FIBA 3x3 World Tour Manila Masters

Gurugram received a ticket to the Manila Masters, which is the second stop on the FIBA 3x3 World Tour 2022 and will be held on May 28-29.