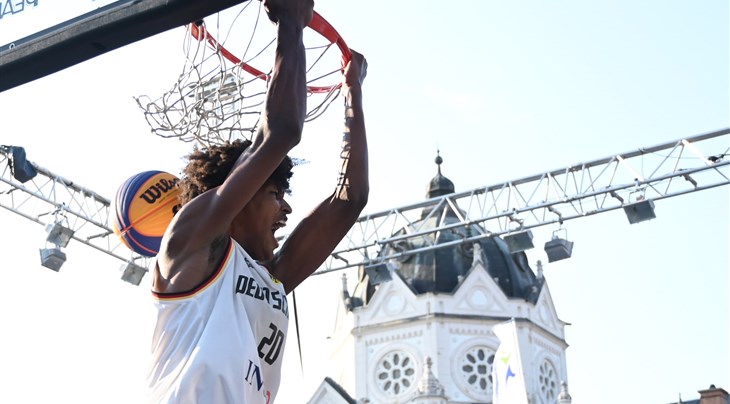 HANNOVER (Germany) - Fabian Giessmann was a mostly unknown player at the recent Basketball Without Borders Europe camp in Milan, but the young German served as a great ambassador in showing that 3x3 players can also shine in basketball.

"It means a lot … kind of showing myself and kind of showing 3x3 basketball a little," said Giessmann of playing at the BWB event. "It's great because I can show them that I am good. Because most of the time they think I am trash because I only play 3x3. That's not the case."

The Hannover native really valued the chance to cross over and play some basketball.

"I think it's a great opportunity to show a 3x3 player in basketball. It's kind of tough for me because 3x3 and basketball are a totally different game - a lot of running up and down, up and down. That's not 3x3, which is more like transition basketball, faster basketball."

Giessmann performed pretty admirably according to his coach Johannes Birkenhagen, who was in Italy to observe how he played.

"I think he did pretty well. It was great to see that he is able to compete at the highest level of European youth basketball, even in basketball," Birkenhagen said. "What stood out the most was his rebounding, especially his offensive rebounding. He was very active on the offensive glass and was able to create second chances, putbacks or provoke fouls."

The coach continued: "The more challenging part was the aspect of team defense, because the defensive concepts in that regard differ quite a bit from each other. So being in the right spot, especially when defending on the weak side, was definitely a challenge." Giessmann (right) defending at the rim at BWB Europe camp

Giessmann is still quite new to the sport in general, having only played basketball for two years before moving to 3x3. And he really enjoys the half-court discipline much more.

"Most people don't think good things about 3x3, they’re not really sure about it. They don't think 3x3 is as good as I think it is," said Giessmann, who since the camp has topped all scorers in the qualifiers to the 3x3 U17 Europe Cup with 30 points in 3 games (in a first to 21 game).

"I like the spacing. Here (in basketball) it's a different game. If I play basketball, obviously there are not a lot of open passes, not that many passing lanes. It's tougher. For me as a big man, in 3x3, I'm setting the screen and then getting the alley-oop pass and dunking it. That's the 3x3 game for me - or I'm getting the post-up and score. Here, I'm getting help-sides and everything else," he added.

Giessmann, who teamed up with Möller, Denzel Agyeman and Linus Beikame to win the German 3x3 U18 championship in 2021 as Hannover Splash, appreciates FIBA's continued efforts to push the 3x3 game.

And now thanks to Giessmann, many in the basketball world know how well 3x3 players can play.