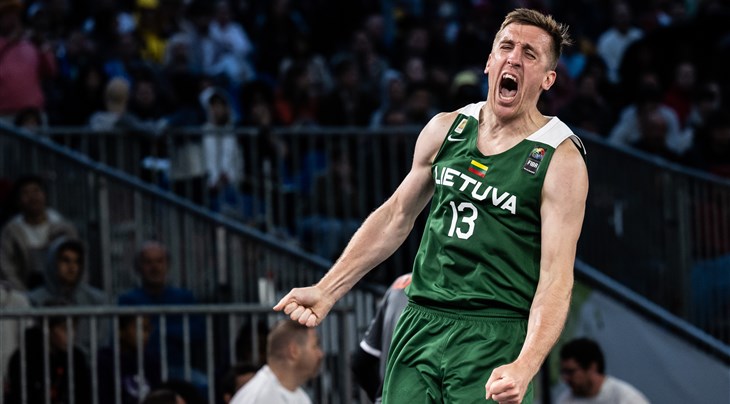 ANTWERP (Belgium) - Four men's teams and 4 women's teams will fight for the medals at the Crelan FIBA 3x3 World Cup 2022 after winning their respective quarter-finals on June 25.

The number one seed Serbia remain on pace to win their 5th World Cup trophy in seven editions. 'The Maestro' Dejan Majstorovic had a game-high 8 points, including the game-winner, in what most thought would be the final against the Tokyo 2020 Olympics gold medalists Latvia.

Serbia's opponents in the semi-finals will be Belgium, who defeated Poland in their quarter-final (18-14). The hosts got great contributions from Nick Celis and Maxime Depuydt - who combined for 13 points - and of course a loooooooooud Belgian crowd.

The other second semi-final in the men's category will see France playing against Lithuania. After defeating Austria in the play-in, les Bleus ended the Netherlands' 4-game winning streak in Antwerp (18-12), with lefty sharpshooter scoring a game-high 7 points.

Lithuania knocked out the reigning champions USA in a 21-11 win, which saw another lefty, Marijus Uzupis record a triple-five with 7 points, 6 highlights and 6 rebounds. His three consecutive two-pointers turned the game upside down for Lithuania.

Four hours after beating Mongolia in the play-in (21-9), les Bleues avenged their home loss against Spain last year in the semi-finals of the Europe Cup. Former number one 3x3 player in the world Marie-Eve Paget scored a short jumper from the baseline to ice the game in overtime (15-14).

France will play Canada, who had quite the day with back-to-back wins against the Women's Series reigning champs Germany in the play-in and the USA in the quarter-finals (14-10). The Plouffe twin sisters (Katherine and Michelle) combined for 11 points in the win.

The other semi-final will see Lithuania against Tokyo 2020 bronze medalists China. For their first-ever World Cup appearance, Lithuania defeated the Netherlands (19-10) in the play-offs and then defeated Poland in the quarter-finals (19-16) in what was likely the best game of the tournament in the women's category. Monika Grigalauskyte led all players in the game with a 7-point, 5-rebound double-double.

China ended the Belgian hopes in the last quarter-final (21-13). The Tokyo Olympics top scorer Lili Wang had a game-high 9 points in a game, where the Belgian Cats were limited to just three players after Laure Resimont injured her ankle in the play-in win against Brazil.