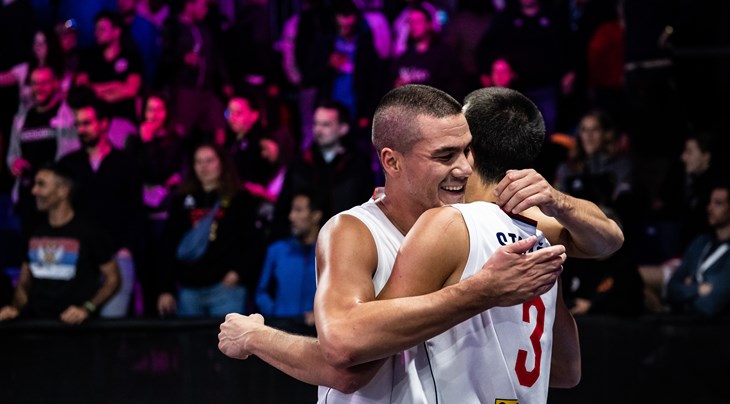 MIES (Switzerland) - As we draw to a close in 2022, it's time to celebrate those who defined this outrageous 3x3 season.

Here are the five men's teams who starred this year.

Who wears the crown at the end of 2022? It's these spectacular Serbs who were No.1 ranked all season long and lifted the standard of the FIBA 3x3 World Tour to another level.

They ran out of the blocks faster than Usain Bolt and won the first four Masters of the season to set a new record. They considered renaming themselves 'Ub-beatable' until they had a late season stumble that had some critics questioning their top dog status.

Big mistake! In the showpiece Abu Dhabi Final, Ub were the best of the best to win the biggest prize on the World Tour.

They've got an almost perfect 3x3 team with Strahinja Stojacic the best player in the game, Dejan Majstorovic the top shooter and Marko Brankovic the ideal third wheel. Add to that, Nemanja Barac who is a defensive menace and does all the little things that doesn't always show on the box score.

And you better believe these dudes will be back bigger and better in 2023.

When it comes to men's 3x3, there has only been one powerhouse. That's Serbia, of course, who cemented their status after double delight this year, where they won the Crelan FIBA 3x3 World Cup 2022 and FIBA 3x3 Europe Cup 2022.

With Stojacic, Majstorovic and Brankovic in the line-up, Serbia had already built-in chemistry and they were further strengthened by the inclusion of Liman big fella Mihailo Vasic, who gave them strength in the paint.

Serbia have an embarrassment of riches with a host of other stars unlucky not to crack the team. They've now won five World Cups and four consecutive Europe Cups to underline their continual dominance of men's 3x3.

Once Karlis Lasmanis put on his cape and landed Flight KLM back on the Enlio half-court, a reloaded Riga went on one of the most dominant runs of all-time.

Their four Olympic gold medalists had never looked better as they reeled off 27 straight wins, including a trio of Masters titles. Lasmanis and fellow superhero Nauris Miezis went to another level as they traded game-winners, outrageous moves and constant smackdowns to pack an almighty punch.

Riga peaked at the Riyadh Masters, where they won an epic final against No.1 Ub before finally stumbling in the last couple of events.

But we'll never forget that insane win streak when everything Riga did turned to gold.

The future looks incredibly bright for Poland, who stunned Serbia with an epic comeback victory over Serbia to win the FIBA 3x3 U23 World Cup 2022.

In one of the all-time great finishes, Poland stormed back from a 20-15 with a stunning late burst punctuated by a cold-blooded two-pointer from MVP Mateusz Szlachetka.

It was Poland's first major title in 3x3 and a triumph that will be remembered forever.

Age was no barrier for France's supremely talented U21 team who beat their older opponents to claim the FIBA 3x3 Nations League 2022.

In a tough competition, featuring mostly U23 teams in 11 conferences stretching four months, France U21 prevailed as they showcased the new gen of 3x3.

None was more exciting than high-flying Lorenzo Thirouard-Samson, who was named MVP after leading France in points and finishing third overall in the scoring charts.