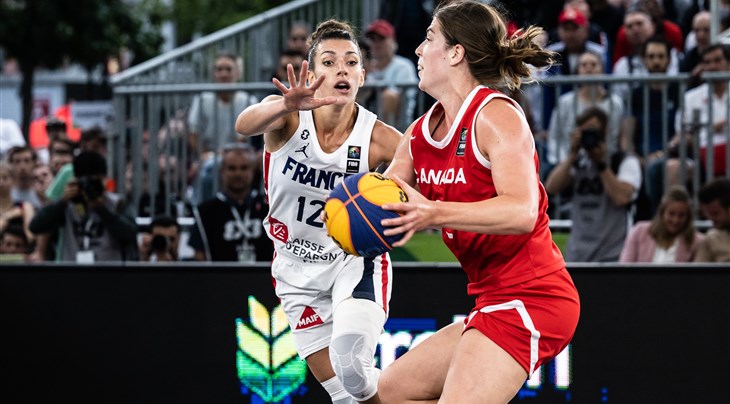 CONSTANTA (Romania) - This incredible FIBA 3x3 Women's Series 2022 season will end with a bang in picturesque Constanta on September 17-18 as powers Canada and France renew their rivalry in a day one blockbuster.

After a spectacular 11 stops over 4 months, it all comes down to the decider with the top 7 teams in the standings - and host Romania - dreaming of glory at the showpiece Women's Series Final.

No.1 seed Canada and Crelan FIBA 3x3 World Cup 2022 champs France will start a new chapter in their epic rivalry to headline Pool A. France came out on top when it mattered most in Antwerp, but the painful defeat has only made Canada stronger.

No other teams won more titles than Canada this year (3), all that from just five total appearances. This is how Michelle Plouffe climbed all the way up to number one 3x3 player in the world in the FIBA 3x3 Individual World Ranking. She also tops the player value standings on the season. If she maintains her position after the final, she will claim 10,000 USD in prize money.

The 6ft. 3in (1.9m) star makes a formidable duo with sister Katherine as she fights for 3x3's crown with World Cup 2022 MVP Laetitia Guapo who will lead a confident France hoping to add more silverware to their trophy cabinet after winning the FIBA 3x3 Europe Cup 2022.

No.4 seed France will also believe they have the edge over Lithuania after knocking them out in a quarter-final thriller in Graz.

Both teams will have slightly different line-ups in Constanta with Lithuania handing the keys to dynamic 24-year-old Martyna Petrenaite, who can heat up quicker a Nicki Minaj verse.

Host Romania will be relying on their passionate fans in the bleachers to inspire them on a giant-killing run and they are hoping 23-year-old sensation Teodora Manea can become her proud country's next big thing in 3x3.

Defending Women's Series champs Germany top Pool B as the No.2 seed are desperate to end 2022 on a high after starting the season so brightly by going bang, bang in the opening two Stops.

They've been winless ever since but Germany have their A-Team in Constanta led by the towering Sonja Greinacher, who is battling Michelle Plouffe in most of the statistical categories.

They'll have to contend with a loaded Pool B, which has fellow European power Spain who are missing superstar Sandra Ygueravide but that's not a worry because Aitana Cuevas is all class around the glass.

Hoops power USA always bring a stacked roster and this awesome foursome is no exception. No team shot the 2-ball better this season led by the hot hand of Linnae Harper, who hit at a crazy 45% from deep while teammate Lauren Cox is a big game player as she proved with the MVP in USA's triumph in Quebec.

The Americans will need to be on target because Pool B is packed with new kids on the block Dusseldorf ZOOS (GER) looming as a dark horse. The German commercial team have gone from strength to strength in their debut season and are peaking nicely having recently finished runner-up in Eaubonne.

Ama Degbeon and Aoi Katsura have teamed up to become one of the deadliest duos in women's 3x3 and if they simultaneously fire then Dusseldorf might just emerge out of Pool B.

Both pool winners get a ticket to the semi-finals directly, while the teams who rank 2nd and 3rd meet cross in a play-in and the 4th in each pool are eliminated.

There is a total of 279,000 US dollars in prize money at the Constanta Final.