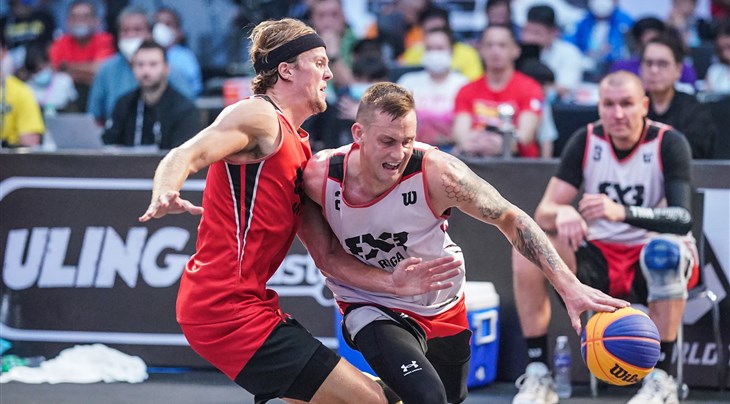 RIYADH (Saudi Arabia) - We're back! After catching your breath, the business end of this crazy FIBA 3x3 World Tour 2022 has arrived, starting with the all-important Riyadh Masters on November 11-12.

Here are the important details for the 10th event of the season.

Where can I watch the Riyadh Masters?

Who is competing in Riyadh?

We've got four Masters winners from this season in this draw, so it is absolutely loaded. For the first time all season, we're not going to start with Ub Huishan NE (SRB) who will for sure put eggs on our face.

But we just can't ignore Riga (LAT) who are unbeatable with superstar Karlis Lasmanis back on the half-court. Their winning streak is up to an insane 20 and they've never looked better, especially cold-blooded Nauris Miezis who seemingly doesn't ever miss in the clutch.

Riga's return to their very best has spooked the competition although Ub will be looking to flex their muscles as they once again unleash their awesome foursome.

The Serbs were totally dominant early in the season, but haven't quite recaptured that form. But they know the World Tour is a marathon and they will look to start peaking in time for the showpiece Abu Dhabi Final.

Antwerp (BEL) have deserved being rated among the very best teams but they've fallen short recently with several runner-up finishes. Sometimes they can be hot and cold, but they should enter Riyadh with a point to prove so expect them to be firing on all cylinders.

Rounding out our list of favorites just has to be Vienna (AUT), who memorably celebrated a first ever triumph on the World Tour with victory in Paris.

The Austrians won't be content and have had plenty of time to ensure they refocus as they bid for back-to-back titles.

Who are the best players?

We've got four of the top six ranked players in the world but let's start with a couple outside that list. They are partners in crime so just have to be mentioned together - Riga's Karlis Lasmanis and Nauris Miezis who are proving any discussion of best duos starts with them.

Though No.1 ranked Strahinja Stojacic and No.3 Dejan Majstorovic from Ub could rightly argue they are the deadliest of them all and it's hard to disagree when they are both firing simultaneously.

After a brilliant start to the season, Stojacic laid the early smack down in best player alive discussions, but his older brother Stefan Stojacic from Vienna has issued a reminder over why he's in the GOAT discussion.

And he's also reminded everyone exactly where his younger bro Strahinja learned his dope skills from.

While Thibaut Vervoort aka 'Must See TV' is also fighting for the crown and if he can help Antwerp win a second Masters then he might just end up sitting on the throne.

You want genuine entertainers, dudes who are going to do something trippy with the Wilson, then you just have to watch Utrecht's Worthy de Jong or Mac Tallo from Cebu Chooks.