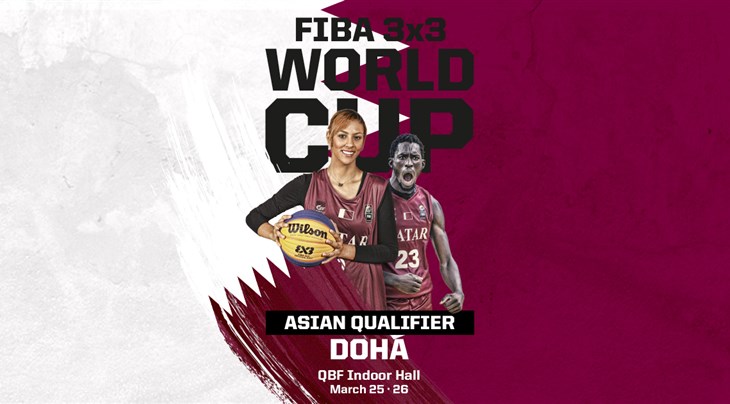 DOHA (Qatar) - The last tickets for the FIBA 3x3 World Cup 2022 are up for grabs in Doha on March 25-26, as 12 desperate teams fight to qualify for this year's showpiece in Antwerp.

The event is held at the Al Gharafa Sports Complex, a state-of-the-art sport venue. Doha is a much-loved 3x3 destination having held Masters events in the past three seasons of the FIBA 3x3 World Tour.

Let's take a closer look at the action in Doha, an iconic 3x3 site over the years.

Where can I watch the FIBA 3x3 World Cup Qualifier Asia 2022?

Who is competing in Doha?

It's tough to judge because there has unfortunately been little action in 3x3 in Asia since the pandemic, so realistically this could be wide open races.

In the men's, it does appear a two-horse race between Qatar and New Zealand who have been drawn together in Pool A and will meet in a day one blockbuster.

Qatar famously won the FIBA 3x3 World Cup 2014 and will be boosted by their home support but New Zealand, the No.1 ranked team in Oceania, loom as a tough opponent.

In the women's, Qatar and New Zealand are right in the mix like their counterparts but Uzbekistan, ranked No.4 in Asia, and Iran should fancy their chances too.

You surely haven't forgotten Tai Wynyard? OG fans will remember this talented teenager being built like a man mountain as he bullied opponents like they were in kindergarten.

He won MVP at the FIBA 3x3 U18 World Cup 2015 to lead New Zealand's triumph then again starred in the same event 12 months later before embarking on a basketball career which saw him play for iconic college Kentucky in the USA.

After injuries derailed his career, the 6ft. 10in (2.08m) beast is fit and firing and looking to issue a reminder of his talents by leading the Tall Blacks into the 3x3 World Cup.

This 6ft. 6in (1.98m) high-flyer will surely get the home fans hollering from the bleachers.

In the women's, real ones will probably recognize New Zealand's Tiarna Clarke who has previously played on the Women's Series and at the 3x3 U18 World Cup. She is a ball handling wizard and - for those unaware - don't be surprised to see her drop a filthy dime.

Another player to keep an eye out for is 22-year-old Negin Rasoulipour, who was part of Iran's team attempting to qualify for the Tokyo Olympics. Her dimes are not dimes, they're bitcoins and she has a mean step-back game.

She can blow by with the drive to the rim and also pull out the two from deep. In other words, the 5ft. 9in, (1.75m) dynamo is a walking bucket.